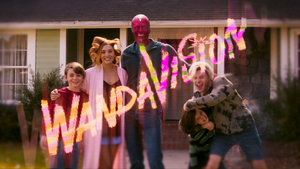 Halloween's a magical holiday all about family, friends, and the thrill of getting to be someone else for a day!

Disturbances on Halloween separate Wanda from Vision, who looks into anomalous activity in Westview.

Like this? Let us know!
Retrieved from "https://marvel.fandom.com/wiki/WandaVision_Season_1_6?oldid=6499465"
Community content is available under CC-BY-SA unless otherwise noted.