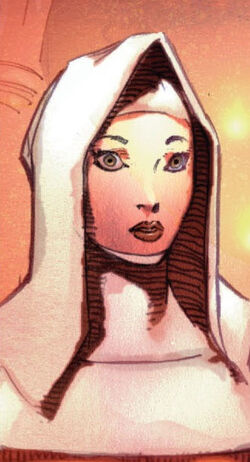 A time traveling experiment gone wrong created another divergent timeline, one in which present day heroes already emerged in the 17th century, the year 1602 to be precise. Mutants were referred to as "witchbreed" and, as such, were feared and hunted during the Spanish Inquisition. Those discovered are turned over to the Grand Inquisitor, this reality's version of Magneto. This timeline's version of the Scarlet Witch was "Sister Wanda", a nun, who aided the Grand Inquisitor together with her brother Petros, both convinced that their "witchbreed" gifts came from god.[citation needed]

The Inquisitor used the fervor of King James to save some "witchbreed" with less physical mutations from being burned at the stake, but eventually he and his aides were exposed as being mutants themselves. The Grand Inquisitor, Wanda and her brother escaped the stake, and boarded a ship to the New World. Their ship was detained by his long time rival, Carlos Javier (who had gathered his own group of witchbreed youngsters), who asked the Grand Inquisitors help. In return, the Inquisitor made Javier promise to teach Wanda and her brother until he would one day send for them, and also revealed that he was their father, but swore Javier never to tell them.[citation needed]

Like this? Let us know!
Retrieved from "https://marvel.fandom.com/wiki/Wanda_(Earth-311)?oldid=5288368"
Community content is available under CC-BY-SA unless otherwise noted.