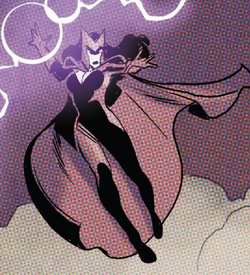 Scarlet Witch appeared in a flashback of Magneto as he got drunk. In the memory, Wanda cast a spell to hurt the members of her family in order to get rid of her father, but the spell didn't work on him because it turned out that she wasn't his biological daughter at all. She criticized him by saying he had no family and that he had always been alone which she relished in the thought of not being his child.

She struck out at him with her powers but Magneto magnetically balled up a huge chuck of metal and threw it at her knocking her unconscious. He then remembered that Stryfe was the one who killed Wanda and Pietro.[1]

Like this? Let us know!
Retrieved from "https://marvel.fandom.com/wiki/Wanda_Maximoff_(Age_of_X-Man)_(Earth-616)?oldid=5338204"
Community content is available under CC-BY-SA unless otherwise noted.