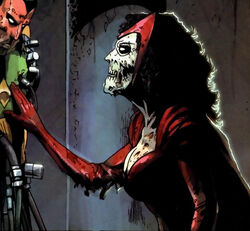 Little was detailed about Scarlet Witch’s life before the zombie plague arrived on Earth-2149, however it can be presumed that it followed much the same path as her Earth-616 counterpart.

Scarlet Witch is at Avengers Mansion when Ash tried to blast his way into the mansion. She, and the other Avengers greeted the intruder and demanded he explain himself. Ash began ranting about an Army of the Dead, and began to get a little hot under the collar until she got tired of him and “Bamfed” the madman into a park duck-pond to cool off.

Presumably, those remaining at the Avengers Mansion after Col. America and the others left to investigate reports of purple lightning and something fallen from the sky, received a call from Nick Fury to join the resistance aboard the S.H.I.E.L.D. Helicarrier, and left to join them.

With the extremely varied bunch all assembled on the Helicarrier, Nick explained how serious he believed the situation to be; that it was the end of the world. He also explained that whatever the histories of those assembled, they were all on the same side.

It could also be assumed that she was part of the team sent back down to the surface to battle the zombies, and look for survivors. She ran once more into dimension-hopping hero Ashley J. Williams. This time, funnily enough, he didn't seem so crazy, and, after a run-in with a zombified Howard the Duck, she told him how the infected Avengers lured the others to Avengers Mansion, with an Assemble call, and how she just managed to get away.

She agreed to help Ash and Dazzler find the Necronomicon, but when zombified Thor arrived, they headed for shelter in Dr Strange’s Sanctum. There, they found Dr Druid, munching on the remains of Wong, who told them he couldn't stop.

Ash said that if Dr Druid showed him where the library was, that he could help him get better, but as Druid pointed the way Ash blew his head off. As they looked through the library they came across many strange books, but not the Necronomicon. After a little gentle persuasion, one of the magic books there told them that the book that they sought was in Latveria, and so the three made plans to see Victor von Doom.

As they left, they found their way to the Quinjet was blocked by zombified super-kids who were attacking citizens. They need a distraction, and right on cue a large explosion went off. They callously left Nextwave (who caused the explosion), to escape in the Quinjet.

Gaining access to the castle, Dr Doom wasn’t too happy about Ash’s constant wise-cracks, and made it obvious that he wasn’t welcome. Doom ordered Ash removed and placed with ‘the others’. Scarlet Witch begged Doom for clemency, as Ash was dragged to a large chamber filled with Latverian refugees by Doombots. While being entertained by Doom, Wanda made her excuses and snuck off to free Ash, to find the library. As she led him out of the chamber, they were spotted by another Doombot, but it was easily destroyed with her Hex Power. The lifeless robot gave Ash an idea, and he told Scarlet Witch to keep Doom occupied, and so she returned to the banquet.

A little later, Wanda and Dazzler were heading through the castle when they came across Ash happily being followed by a zombified Enchantress. Dazzler knocked him to the ground, and as he looked up, he saw Enchantress as she truly was; zombified. Dazzler pointed her out to Ash, but while she was distracted, Enchantress sunk her teeth into her finger, taking it off. Just then, von Doom appeared again, killing Enchantress and Dazzler with some kind of blast.

Doom threatened to kill Ash and Scarlet Witch, but was interrupted when the Super-Zombie horde had cleared Latveria and the surrounding countries, and were back for the remaining survivors. The huge mass of zombies attacked Doomstadt, but were held off by the castles protective force-field . Eventually though, several of the horde broke through, and as Scarlet Witch was bitten by the zombified Punisher, she begged Ash to find the Necronomicon and stop all this. Ash began to explain that he was wrong, and that the Book of the Dead was not involved.[1][2]

For, Wanda, however, it was too late, as she was later shown having been converted into a zombie herself, now working for the zombiefied Kingpin. In this role, she worked with the damaged Vision, using his continued love for her to convince him to block any type of enemy radio signals as necessary. When Machine Man and Jocasta attempted to defeat the zombies, Scarlet Witch was decapitated Machine Man's temporary chainsaw limb and was ripped apart in the zombie pile.[3]

From Marvel Database, a Wikia wiki.
Retrieved from "https://marvel.fandom.com/wiki/Wanda_Maximoff_(Earth-2149)?oldid=6076642"
Community content is available under CC-BY-SA unless otherwise noted.