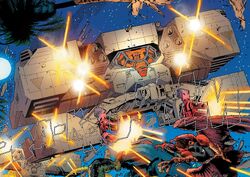 The War-Wagon was a specialized hover-ship piloted by Colonel Glenn Talbot, late of the United States Air Force. Armed with highly advanced weaponry including sonic pulse cannons, the War-Wagon was designed for a singular purpose - to track down and destroy the Hulk. The War-Wagon was equipped with a highly advanced "brain", which could extrapolate data and determine the most ideal strategy for tackling the Hulk in any situation. Talbot could also take manual control of the brain's higher intelligence functions by connecting to it with an encephalo-helmet. The wagon's A.I. discouraged its pilot from using the encephalo-helmet, however, as the human brain was incapable of interpreting the brain's complex programming structure.[citation needed]

The War-Wagon's arsenal included sonic pulse cannons and cluster bombs that released a group of gas grenades upon impact with its target. The hull of the ship was coated with a golden polymer and rigged with electrically-charged defense shields ideal for repelling attackers.[citation needed]

Glenn Talbot violated Soviet airspace when he tracked the Hulk's radioactive emissions to Russia. He then followed him to the Japanese island of Mount Kuroishi - the site of an active volcano. He bombarded the Hulk with the ship's weaponry, but the Hulk, though angered, managed to survive each assault. Against the recommendation of the War-Wagon's brain, Talbot donned the encephalo-helmet and took full command of all the ship's higher functions. This tactic proved disastrous for Talbot who mentally experienced every attack against the War-Wagon as if it were he and not the ship that was being struck. During the battle, Mount Kuroishi erupted and the War-Wagon was caught in a lava geyser blast. The intense heat proved too much for Talbot's psyche and fried his brain. Without a conscious mind to command the vessel, the War-Wagon plummeted to the ground and was destroyed. Talbot was killed instantly.[citation needed]

A new pair of War-Wagons were deployed by Shadow Base to battle Hulk and Harpy in Reno, Nevada. They were quickly destroyed by the two gamma beings.[1]

Retrieved from "https://marvel.fandom.com/wiki/War-Wagon?oldid=5471978"
Community content is available under CC-BY-SA unless otherwise noted.