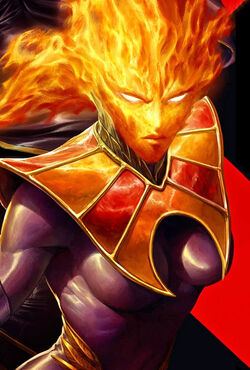 Regret is for the weak, and we were born strong. In that place, only the fit survive...and here we are. Would you like to know the one thing that kept us alive all those years? I'll tell you... It wasn't love.

War was the first of her name to serve in Apocalypse's Horsemen. She, alongside her fellow Horsemen, was sealed away on Arakko.[5] They ended up in the dimension of Amenth which was populated by endless hordes of Daemons. Her mother Genesis and the other mutants that were left on Arakko made the island their home and build towers to protect them from the threat of the Daemons. Through these years, War had a union with a fellow mutant Bracken and together conceived the Summoner. Her husband would later be killed by Solem.[2]

However, after her mother fell at hands of Amenth's dark god and leader of the Daemons, Annihilation, the Daemons finally managed to destroy Arakko's towers and attack its mutant population. In a last ditch effort to save Arakko, War and the surviving mutants send the Summoner to Earth to find her father Apocalypse.[6] However, her mother was actually still alive and combined with Annihilation, which lead to the Daemons and Arakko's forces joining together and decided to invade Krakoa.[7]

After months had passed, War, alongside her siblings, the other Horsemen, began leading the Daemon armies, and assaulted Otherworld in order to access Krakoa. After reuniting with their father, the Horsemen and Summoner attacked Apocalypse and launched an attack on the accompanying members of the X-Men. The fight was broken up by the Omniversal Majestrix Saturnyne who offered each side to participate in the challenge of the Ten of Swords for victory, to which they agreed.[8]

After War got her sword, she alongside the Swordbearers of Arakko went to the Starlight Citadel where the tournament would be held.[9]

After War sat down for the tournament banquet, she poisoned Wolverine's food, only to be eaten by Cypher, killing him. White Sword felt the cowardice of her actions weak, and revived him.[10]

With her turn in tow, War was to face off against Solem in the tournament, only for Solem to call upon the favour Wolverine promised, to fight for him. Letting War know who killed her son before leaving, she was angered by this and began the battle. War tried cutting Wolverines head off, but due to his Adamantium spine she was unsuccessful, giving Wolverine the chance to cut off her left hand.[11]

War participated in the subsequent challenges in which she and her teammates managed to win. However, this proved to be all in vain as, because of White Sword, Krakoa managed to be even with Arakko. After Krakoa had won the tournament,[12] War and her remaining siblings helped their mother in the war for Krakoa, with War summoning all of the Summoners, but the Swordbearers of Krakoa were then joined by the Green Priestesses, the X-Men, the Captain Britain Corps and the Vescora. The war ended when Apocalypse manage to conquer Annihilation and as a reward for winning the tournament he switched places with Arakko, leaving Apocalypse to finally be reunited with his wife and children and govern Amenth together.[13]

War was a mutant with the following powers:

Like this? Let us know!
Retrieved from "https://marvel.fandom.com/wiki/War_(First_Horsemen)_(Earth-616)?oldid=6495654"
Community content is available under CC-BY-SA unless otherwise noted.