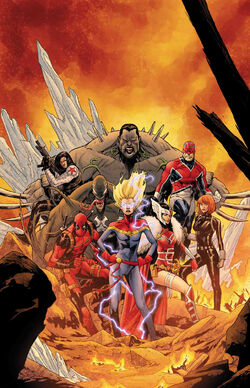 With Captain America's strikeforce dispatched to Jotunheim to rescue Thor and Lady Freyja leading a strikeforce to destroy the Black Bifrost in Svartalfheim, Captain Marvel assembled her own strikeforce to protect Midgard. Danvers recruited a team of powerful heroes and antiheroes -- Black Widow, Deadpool, Lady Sif, Venom, Weapon H, and the Winter Soldier -- and led them into several forays against the invading Dark Elves, Frost Giants, and Fire Goblins.[1]

Upon learning from Captain Britain that Malekith was conquering London, Danvers led the team to cut off the head of the snake. While the rest of the team engaged Malekith's dark elf forces, Venom attempted to kill the warlord himself, but was subdued by the Ebony Blade and captured.[2]

Like this? Let us know!
Retrieved from "https://marvel.fandom.com/wiki/War_Avengers_(Earth-616)?oldid=6046902"
Community content is available under CC-BY-SA unless otherwise noted.