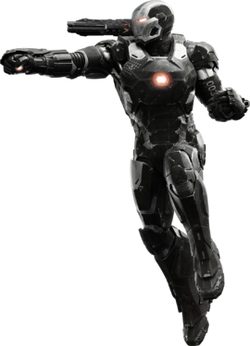 The War Machine Mark III was created by Tony Stark for James Rhodes some time after he became an official member of the Avengers.

Rhodes used this armor when arresting Steve Rogers, and again in a conflict between factions led by Rogers and Stark in Germany. The suit was hit by an energy beam that caused the complete shut down of all function while airborne and subsequently sustained severe damage upon impact with the ground.[1]

The Mark III War Machine is an improved version over the Mark II War Machine. Its weapons and repulsors are superior to those of its predecessor, and a taser nightstick row was added in the back.

Despite its durability, the Mark III War Machine still proved vulnerable to the shield attacks of Captain America, and ultimately succumbed to the destructive power of the Mind Stone.[1]

Retrieved from "https://marvel.fandom.com/wiki/War_Machine_Armor_MK_III_(Earth-199999)?oldid=6083399"
Community content is available under CC-BY-SA unless otherwise noted.