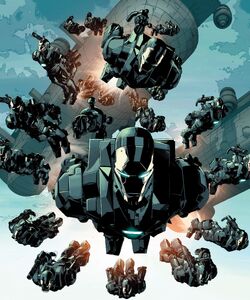 The War Machine Drones are an army of armored suits piloted remotely by Jim Rhodes from the S.H.I.E.L.D. Archangel Helicarrier. Rhodes normally didn't operate more than ten units, as doing so induced him headaches and nosebleed.[1]

The War Machine Drones were dispatched alongside the S.H.I.E.L.D.'s Avengers after Illuminati member Amadeus Cho broke into S.H.I.E.L.D. Station: Golgotha to steal all of Tony Stark's computer files. Cho was able to escape from one drone by disrupting the A.I.'s communication system which caused it to shut down and slave to a secondary source.

In doing so the drone started to attack Captain Marvel and Hawkeye, but Danvers was able to quickly destroy it. The rest of the drones succeeded in cornering Cho so he could be captured by the Invisible Woman, who interrogated him on the whereabouts of the rest of the Illuminati.[2]

The War Machine Drones were deployed later when the Illuminati were found in Spain. However, most of the suits were destroyed by the clandestine group of heroes.[2]

Like this? Let us know!
Retrieved from "https://marvel.fandom.com/wiki/War_Machine_Drones_(Earth-616)?oldid=6433281"
Community content is available under CC-BY-SA unless otherwise noted.