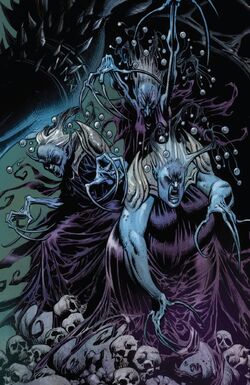 The War Witches are a group of three elder Dark Elves that served as Malekith's war advisors.[1] The tall and thin war witch enjoys making games of corrupting mortals with promises of power.[2]

The War Witches were present during Malekith's attack on Manhattan.[3] They used their own magic to disrupt Doctor Strange's magical abilities. Blade eventually located the source of the magical disruption, but he was overpowered by the War Witches. Jane Foster happened to land on the rooftop where they were located, and she helped Blade kill all three of them.[4]

Equipment: Dreamstones
Transportation: The witches are capable of teleportation.[2]

Retrieved from "https://marvel.fandom.com/wiki/War_Witches_(Earth-616)?oldid=5552181"
Community content is available under CC-BY-SA unless otherwise noted.