View source
watch 01:25
Jurassic World: Dominion Dominates Fandom Wikis - The Loop
Do you like this video?
Play Sound
Part of the War of the Realms event

There'll be no running from this fight, little bugs of Midgard... your baptism by massacre is nigh.

The citizens of Manhattan begin to evacuate through Doctor Strange's Sanctum Sanctorum while the heroes continue fending off the invaders, but are outnumbered. The cavalry arrives in the form of Odin and the Valkyries. Jane Foster and Blade take down the War Witches that were disrupting Doctor Strange's magic, allowing him to cast a spell to finish evacuations. However, the spell is too powerful and all combatants in the side of Midgard are taken out of the fight, leaving the Valkyries at the mercy of Malekith's army.

Since they have been forced to retreat into the Avengers Mountain, the heroes begin to plan their next steps. Freyja decides to command a mission to rescue Thor from Jotunheim, and Odin speaks about the Black Bifrost in Svartalfheim. Captain Marvel plans to gather an army to fight the war in the battlefront, and Daredevil speaks to Sif since they need to find a way to help the blinded Heimdall to see. In Manhattan, all the Valkyries have fallen to the enemy forces, and Valkyrie is slain by Malekith himself. Meanwhile, numerous reports begin to pour from all over the world since Malekith's army has begun to mobilize across the entire globe.

In Greenwich Village, a conglomeration of people gather around Doctor Strange's Sanctum Sanctorum. Zelma Stanton and Bats guide them into the entrance as part of an evacuation protocol. Jane Foster comes out of the building and reports Bats that while some of the Asgardian refugees are inside, there is still a Skidbladnir flying from the The Bronx. Jane suddenly becomes transfixed; the narration explains she finds herself filled with a calling she thought she would never hear again.

In the streets of Manhattan, the Punisher unloads his arsenal on a band of Dark Elves, who remain defenseless due to his use of iron bullets. An elf tries to sneak behind him, but he is promptly stabbed from behind by Wolverine. The two vigilantes make small talk, with Frank commenting he heard Logan was dead, and resume fighting. The narration elaborates that trolls are rampaging through the Theatre District, War Angels are attacking the Upper West Side, the Fire Goblins are burning up SoHo, and Hell's Kitchen is frozen in Frost Giant ice. In one building in such predicament, Captain America is helping evacuate the Tennants. He jumps through a window, hitting a Frost Giant in the face and cushioning his land on a car. The Frost Giant falls behind him. Steve talks with Iron Man, who is flying along War Angels. Stark points out that there are too many civilians in the line of fire, and asks Black Panther if they can use their teleporter in Avengers Mountain. In the middle of a fight, T'Challa explains that he is completely cut off from the mountain, or Wakanda. In fact, networks are crashing all over the globe. Somewhere else, Dario Agger sits leisurely at a coffee shop table, holding a conversation on his phone with a Roxxon employee involving a global cyberattack they have just launched. Black Panther asks Doctor Strange to use magic to finish civilian evacuation, but he mentions he is having issues with his magic.

Malekith the Accursed oversees from a rooftop the chaos ravaging the city, rejoicing in the struggle of Midgard's heroes. He is accompanied by his bog tiger and the War Witches, who are the reason Strange's powers are being interfered with. In the streets below, Freyja clashes against the Queen of Angels while Spider-Man dodges Sindr's attacks, pestering her with his quips. Ulik trades blows with Hulk while the Enchantress uses her magic to keep the Ghost Rider at bay. She's abruptly run over by a Skidbladnir piloted by Jane, and she gets off to join the battle against Malekith, to Freyja's surprise.

A Frost Giant stomps on the boat, sending Jane and Freyja flying away. In the foreground, Spider-Man is knocked out and at Sindr's mercy. Captain Marvel punches the giant, Muspelheim fireflies make their way to the subway, and Hulk is overpowered by trolls. These scenes are accompanied by the narrator recounting that Midgard has never such an invasion, and that Manhattan will fall and be followed by other major cities. Jane and Freyja look up to the sky, alarmed by the sound of the War Horn of Asgard. Odin rides Sleipnir out of a portal, accompanied by a legion of Valkyries. In the middle of his cries of war, Odin pierces through a Frost Giant. Jane approaches Valkyrie, and asks her to take her to Malekith. She also tries to make Brunnhilde recognize her as the former Thor. The heroes get their second wind and begin to fight alongside the Valkyries. Odin blasts Sindr and Ulik, interrupting the Queen of Cinder's exclamation of surprise at his survival. Odin brushes off the assault he suffered at the hands of the Dark Elf assassins and cries out for Malekith. Odin comes near Freyja, and she informs him about Loki's death. Laufey appears from the side and thrusts Odin into a building with the jib of a broken crane.

In the air, Jane and Valkyrie ride Aragorn while striking War Angels until they spot Malekith. Brunnhilde recognizes Jane as the former Thor, but decides to drop her at the top of a building nearby for her safety before taking on Malekith on her own. Jane finds herself in the same rooftop as the War Witches, and sneaks up on them as they're using magic to restrain Blade, who had pinpointed them as the source of Strange's problems. Jane slashes the hair of a witch from behind, startling them. With the interference down, Doctor Strange begins to chant a spell. A portal of blue energy opens below him, and tendrils extend out of it. Freyja helps Odin get up, noticing he still suffers from the Dark Elves' knife wounds.

Flying on his bog tiger, Malekith orders his troops to close down the portal. He's intercepted by Valkyrie, who commands her kind to protect it. Blade and Jane stand with the War Witches dead on their feet, and they notice the energy tendrils begin to envelope them. Captain America tries to warn Doctor Strange that his spell is too powerful and it's evacuating combatants as well, but Stephen is out of control. The heroes as well as the citizens appear at the Avengers Mountain. Strange waveringly explains the spell was too powerful to control. Jane insists they have to go back, but Freyja, still supporting Odin, warns her that Malekith's forces are too powerful and they can't return. If they want a chance of victory, she reveals they will need to journey elsewhere. Freyja relies that Thor is trapped in Jotunheim and they need to save him. Weakly, Odin interjects that they need to go to Svartalfheim and take out the Black Bifrost, which is how Malekith moves between realms. Sif points out that the enemy is in New York, and tells Black Panther to send them back. T'Challa explains that all major systems are down, and declares that it's time the Agents of Wakanda deal with Roxxon. Captain Marvel and Captain America strategize, and Steve agrees with her suggestion to assemble an army to fight this war in the trenches. The Heroes for Hire and Wolverine observe from behind, trying to grasp the situation. Iron Fist wonders if Logan isn't going to talk about the fact he's not dead. Wolverine tells him not without beer.

Hildegarde and Ghost Rider attend to Odin. Freyja tells them to get him to bed since he needs the Odinsleep. Sif approaches Freyja to argue against her planning, mentioning that without his eyesight, Heimdall can't know where to send them. Daredevil steps it and suggests Sif talks with him about this. Freyja acknowledges the risks of the situation, and decides to name Jane the All-Mother of Asgard, refusing to leave her people without a leader. Freyja finds Jane crying in front of computer screens, mumbling that they should have gone back. On TV, the news from Roxx News report that the Valkyries have been slaughtered by Malekith's forces.

In the streets of Manhattan, the corpses of the Valkyrie lie on the ground. The narration elaborates on the legend surrounding their labor of ferrying slain souls to Valhalla. Ravaged by battle, Valkyrie stands on top of a pile of fallen monsters, swinging her sword at her enemies. She goads Malekith into battle, and she's suddenly stabbed from behind. The narrator ponders who will ferry their souls if the Valkyrie themselves have fallen. The narrator declares that the time of gods and Valhalla has ended, and the bloody age of Malekith has begun. Brunnhilde kneels in shock, and behind her, Malekith prepares to deliver the final blow. The audio of news reports from all over the world fills the air: Frost Giants have invaded Los Angeles, Dark Elves attack London, trolls rampage through Australia, Fire Demons terrorize Shanghai, South Africa is being attacked by War Angels, and the Draugr march across Brazil. One report encourages people to pray and hope some god is listening. Malekith impales Valkyrie. The narrator attests that no god is listening.

The world at war! AS THE BATTLE FOR NEW YORK CITY CONTINUES, A HERO FALLS!

All the heroes of the Marvel Universe have assembled, yet this still might not be enough to stop Malekith’s endless war. And the one hero who could turn the tide…is stranded where no one can reach him. With Thor trapped in the land of the Frost Giants and the forces of Earth overwhelmed, Black Panther, Jane Foster and Doctor Strange make a desperate gamble. Valhalla awaits… 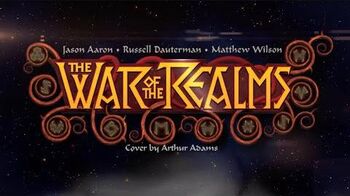