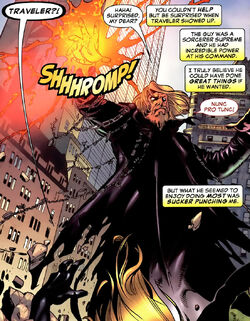 Sir Warren Traveler claimed he was Sorcerer Supreme and in the service of the King of England. He greatly enhanced his power by gaining the Eye of Watoomb at a major shop in Hell's Kitchen. It was apparently all that remained of the Wand of Watoomb in that reality. After gaining the Eye, he went on a rampage.[1]

Through the use of a time spell, he continually attacked Carol, now under the alias of Captain Marvel. She thwarted his last attack by throwing a cat at him. The House of M reality soon ended and Carol thought her problems with Traveler were over, taking the cat with her.[2]

However, Warren returned, acting strangely and confused. He attacked Carol in order to settle their unfinished business. Despite kicking him across to the other side of the room, he continued on rambling and Carol was forced to take action and neutralized him out of precaution. She brought him to an old friend of her, Doctor Strange, an expert on all magic and the supernatural. Strange determined that the switching of realities had made the Eye's energies unstable.[1]

Traveler was able to free himself, seized the Wand of Watoomb, and attacked Strange with it.[1] Strange was able to call Ms. Marvel to help via her cat. She found Strange dead and was pulled into an alternate reality. However, they returned to Earth, and Strange was both alive and prepared for Traveler. With Ms. Marvel's help, Traveler was again banished, although both believe he would eventually return.[3]

Traveler is skilled in magic, as the Sorcerer Supreme of the House of M. He uses a time-altering spell to 'sidestep' and appear in multiple locations at once, as well as being capable of flight, time-jumping, setting the Eye of Watoomb upon his eye, dispel the enchantments of others, magical energy projection in the form of explosions, burning shots and force beams, and the conjuration of dragons and charging bulls under his command.

Briefly held the Wand of Watoomb, as well as holding the Eye of Watoomb, a part of the House of M-version of the Wand, replacing his right eye with it and allowing him to jump realities more easily

Like this? Let us know!
Retrieved from "https://marvel.fandom.com/wiki/Warren_Traveler_(Earth-58163)?oldid=5571348"
Community content is available under CC-BY-SA unless otherwise noted.