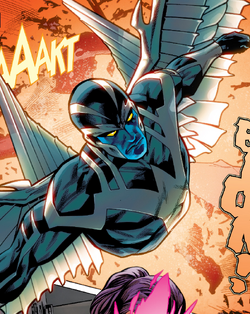 In hopes to get rid of his Archangel powers, Warren Worthington III contacted the Clan Akkaba.[2] They cut off his "tainted" wings and secretly used them to create an army of Archangels called the Death-Flight. One of those clones escaped and was found by Magneto;[3] however, the Archangel was little more than a mindless drone, so Magneto contacted Psylocke and convinced her to help whom he mistakenly believed to be the real Warren Worthington.[4] Psylocke tried many times to reach Warren's consciousness, but all attempts were futile. In the end, under her psychic leash Archangel became simply a heavy hitter in Magneto's X-Men.[1]

After dealing with the Dark Riders, Psylocke tried to scan Warren's mind one more time, when suddenly she was taken into Warren's psyche represented by a city in ruins, with a piece of Warren inside. Warren's consciousness warned her that the city of Green Ridge would be ravaged by an army of Archangels unless the X-Men stopped him. Psylocke and Magneto went to investigate, and found the real Angel there. They soon came to know of Angel's deal with Clan Akabba.[5] Clan Akabba revealed their true intentions in helping Warren, when their army of cloned Archangels led by the escaped clone attacked Green Ridge. Psylocke tried to control him once again, but failed. In the end, Angel, realizing that Archangel needed his humanity, merged with the last remaining clone, the one who had become a part of Magneto's X-Men, creating a new being. This new Archangel was unsure of who or what he now was, but was determined to find out. He swore off all violence and returned with Magneto's X-Men to their base in the Savage Land.[6]

Like this? Let us know!
Retrieved from "https://marvel.fandom.com/wiki/Warren_Worthington_III_(Clone)_(Earth-616)?oldid=5476226"
Community content is available under CC-BY-SA unless otherwise noted.