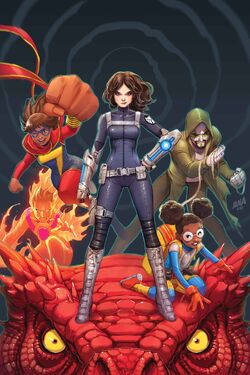 Origin
When Captain America took over America, Daisy Johnson formed a team of Inhumans to find another Inhuman who could help take him down.

The Warriors were a ad-hoc team created by S.H.I.E.L.D. agent Quake to resist Hydra after it took over the United States. Quake was forced to hide after her team the Moth Squadron was wiped out by the Wrecking Crew. She sent out a call for help, but the only ones to respond to the call were Ms. Marvel, Moon Girl, and Moon Girl's partner Devil Dinosaur.[1]

After busting up a Hydra caravan transporting Inhuman prisoners and recruiting the Inhuman Inferno, the Warriors attacked an Inhuman prisoner camp in New Jersey and rescued the Inhuman royal Karnak. Karnak told the team that there was a certain Inhuman named Leer that could help turn the tide against Hydra.[1] So, the Warriors traveled west in search for this Inhuman. After fighting off the brainwashed Howling Commandos, the Warriors crashed through a gate on the border of the United States and the mutant nation of New Tian.[2]

After ditching the mutant guards that were escorting them out of New Tian, the Warriors stumbled upon a laboratory run by the evil mutant scientist Dark Beast where was experimenting on Inhumans. After a brutal interrogation by Quake and Karnak, Dark Beast admitted that he had Leer once but had turned him over to Hydra. After mutant forces of New Tian had arrived, Dark Beast was handed over to them who then ordered the Warriors to leave. However, the Warriors were intercepted by Hydra forces led by Quake's notorious father Mister Hyde.[3]

Moon Girl and Leer were taken by Mister Hyde to the Inhuman city of New Attilan, which Hydra had turned into an internment camp for NuHumans and Inhumans like them. The Warriors learned where the two were being held from Moon Girl herself after transferring consciousness with Devil Dinosaur. Upon arriving in New Attilan, the Warriors found Moon Girl and Leer and learned that Dark Beast's experiments had activated powers within Leer, which allowed him to boost the powers of other Inhumans. Leer then used his powers to boost the powers of the Warriors so they could lead the Inhuman prisoners of New Attlian in an uprising against Hydra. With help from the Underground, Hydra was forced out of New Attilan. The Warriors then had to rescue Quake after she was taken by Mister Hyde. They knocked Hyde's ship out of the sky while Karnak struck Hyde's pressure points to stop him for good.[5]

The Warriors disbanded soon after Hydra's fall but were forced to reunite to prevent Quake from killing Deadpool in revenge for killing Agent Coulson. They were then forced to ban together after learning that Dark Beast had taken Inferno's niece Ariela under orders from Mister Sinister to get back at Karnak for ending their deal to recreate the Terrigenesis process.[6]

With help from Magik, the Warriors located Mister Sinister's laboratory. They didn't find Ariela, but they did find other Inhuman children Sinister and Dark Beast had been experimenting on. While trying to get the children back to their homes, they were confronted by Sinister, Dark Beast, and a team of creatures under their command. Sinister decided to leave the Warriors alone but warned them he would only give back Ariela if Karnak allowed him to "finish what they started." As the Warriors were returning the last child to his home, they discovered too late that the child was rigged to explode by Sinister.[7]

The Warriors escaped injury thanks to Magik, but they were branded criminals and forced to stay in New Attilan until the situation was sorted out. After learning from Leer that Terrigen Crystals were hidden in the Inhuman throne room, Inferno broke into the throne room, stole the crystals, and took off in a stolen ship in a desperate attempt to rescue his niece.[8] The Warriors were unable to stop Inferno from meeting up with Sinister, but they were able to rescue Ariela. The Warriors later met up with Karnak and confronted Sinister at Karnak's Tower of Wisdom where Sinister had set up a new laboratory. Magik later showed up with a large contingent of Inhumans to fight off Sinister's Inhuman soldiers. Sinister was about to use Inferno as a sacrifice in order to recreate the Terrigenesis process, but he was thwarted by Moon Girl when she smashed a vial containing Terrigen Mists that nearly poisoned Sinister to death.[9]

Karnak then revealed that he used the whole situation to take control of the Ennilux Corp. so he could hand its control over to Moon Girl who he believed was the perfect person to lead the Inhumans and finish the recreation of the Terrigensis process. Moon Girl rebuked Karnak and returned control of Ennilux to Ahura Boltagon. For their actions, interim Inhuman leader Iso banished Inferno and Karnak from New Attilan.[9] The Warriors later disbanded again but on good terms.[10]

Retrieved from "https://marvel.fandom.com/wiki/Warriors_(Earth-616)?oldid=5552205"
Community content is available under CC-BY-SA unless otherwise noted.