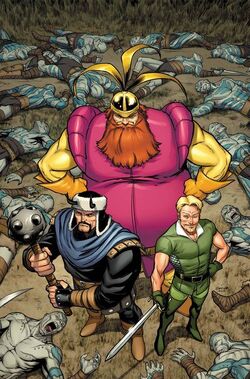 Origin
Close friends of Thor, the three are among the greatest warriors in Asgard.

The Warriors Three were a group of Asgardian warriors and close allies of Thor ever since his youth. They first met when they joined Thor's expedition to restore the Odinsword that had become cracked.[1]

When Asgard was destroyed by Ragnarok, the Warriors Three disappeared as well. However, they were rediscovered by Thor in the bodies of three refugee camp guards in Africa.[2]

In basic types there is a considerable resemblance to Alexandre Dumas' "Three Musketeers", with Hogun as Athos, Volstagg as Porthos, and Fandral as Aramis.

Retrieved from "https://marvel.fandom.com/wiki/Warriors_Three_(Earth-616)?oldid=5552225"
Community content is available under CC-BY-SA unless otherwise noted.