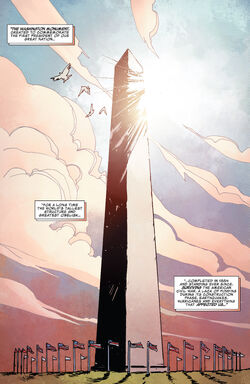 The Washington Monument was completed in 1884 and was created to commemorate the first President of the United States of America, George Washinton. It is located in the National Mall in the center of Washington, D.C.

In 1884 AD, the Washington Monument was completed.[1] It became modern worlds link to the Axis Mundi the celestial connection between the "Heaven and Earth".[2]

The Queen of the Amazons; Artume hoped to use the Omphalos to manipulate the Axis Mundi bringing the world under the control of the Amazons. After inciting a ritualistic dialect to relive the Atlas burden of holding up the heavens and setting him upon Hercules as a distraction. Namora assisted in the fight as the heroes battled the vengeful titan he grabbed the Washington Monument and used it as a club. Hercules entered the Smithsonian Institution and began throwing aircraft and the vengeful Titan. However Hercules was able to knock Atlas out crashing to the ground. During the hustle and bustle of reality shifts between the various hands who possessed the universe altering item in question, Artume sneaked in a cheap shot against its last handler before completing the chanting rite which enabled her to take the reigns of reality into her hands.[3] This short lived world where Amazonia reigned supreme was returned to normal and Atlas was returned to his punishment.[4]

Hercules later returned to Washington, D.C. with Zeus. They travelled to the Washington Monument to find the Norse Axis Mundi link to Yggdrasill.[2]

The Washington Monument was destroyed during a series of numerous terrorist attacks,[1] but was rebuilt sometime afterwards.[5]

On Earth-14845, The Impossible Man has the ability to shape-shift anything he wants to at will. When The Controller slaps a Slave Disc on him, The Impossible Man goes crazy, and turns the Capitol Building into a giant Pez dispenser with his head.[6]

Like this? Let us know!
Retrieved from "https://marvel.fandom.com/wiki/Washington_Monument?oldid=5732080"
Community content is available under CC-BY-SA unless otherwise noted.