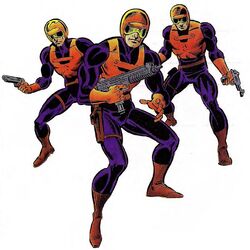 They're an extremist right-wing group, they hadn't been seen for a while. Organized, well funded, violent... They were known for attacking abortion clinics, pornographers, homosexuals... mostly moral issues. They got a lot of support, playing on people's fear.

The Watchdogs were apparently an extreme right-wing terrorist group who claimed to be dedicated to upholding and restoring traditional American values, and sought to impose their moral views upon others using violence, terrorist attacks, and intimidation. They opposed pornography, obscene materials, homosexuality, abortion and sex education, among other subjects, and used arson, vandalism, assault, abduction and murder as their tactics.[1]

As one of their first missions, John Walker, who had recently taken over the role of Captain America, and his partner Lemar Hoskins were sent to investigate the group. Walker inveigled his way into the group, while Hoskins posed as a pornographer. Walker felt somewhat conflicted, as many of the Watchdogs' views matched his own. The Watchdogs attempted to lynch Hoskins because of his supposed crimes, as Walker looked on, worried for his friend's safety. Due to his superhuman strength, however, Hoskins' neck muscles were strong enough for him to survive being hanged. Walker and Hoskins busted that particular local 'pack' or 'Dogpound,' though others continued to operate.[1]

Soon after this, two of Walker's disgruntled former partners, the Left-Winger and the Right-Winger vindictively revealed Walker's secret identity on national television. To take revenge on Walker, the Watchdogs abducted Walker's parents to force Walker to turn himself in to them. When he did, they attempted to execute him. In the ensuing fight, Walker's parents were shot dead. Walker went berserk on seeing his parents' murder, and slaughtered those Watchdogs in attendance.[2]

The Red Skull lured Walker and the previous Captain America Steve Rogers (then known simply as The Captain) to his headquarters and hoped they would kill each other. Also in attendance were representatives of various groups the Red Skull had a hand in - an U.L.T.I.M.A.T.U.M. agent, a member of the Resistants, an unidentified Scourge of the Underworld and a Watchdog among them.[3]

When Rogers was later reinstated as Captain America, the Watchdogs abducted his former girlfriend Bernie Rosenthal, and Rogers and Walker (by that time known as the USAgent) rescued her, smashing the Watchdogs' Vermont pack in the process.[5]

Following the defeat of the regime headed by the fascist Supreme Commander, the Watchdogs took on new apparel, including masks based on the Confederate colors, and began attacking and kidnapping immigrants trying to cross the United States border. They also got supplied with cloaking and teleporting technology by A.I.M..[6][7]

The Watchdogs customarily fitted their hostages with 'dog collars' that administered an electric shock.[2]
Transportation: Watchdogs used their own vehicles, usually pick-ups, vans, motorcycles, and RVs.[1]
Weapons: Watchdogs armed themselves with conventional American-manufactured handguns, shotguns, and rifles, and Army surplus explosives.[1] The Red Skull specifically denied Watchdog Prime access to exotic weaponry so that they continued to look like a "grassroots" movement.[4]

Retrieved from "https://marvel.fandom.com/wiki/Watchdogs_(Earth-616)?oldid=5222979"
Community content is available under CC-BY-SA unless otherwise noted.