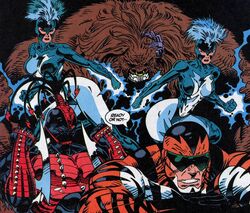 Weapon: P.R.I.M.E. first appeared as a group of super-human operatives for Department K, working alongside S.H.I.E.L.D. to capture the fugitive known as Cable and his proteges, X-Force.[1][2][3]

After Alpha Flight and Department H was officially suspended,[5] Weapon: P.R.I.M.E. was assigned by General Clarke (Department H's former military liaison) to replace them. Under the control of General Clarke, Weapon P.R.I.M.E. was ordered to remove Northstar from the public eye, compounded by his apparent murder of a tabloid reporter. Weapon: P.R.I.M.E. tracked Northstar down, first in Ibiza, then in Russia, finally giving up in New Orleans under orders from their leader, Tigerstryke who came to believe in Northstar's innocence.[6]

Retrieved from "https://marvel.fandom.com/wiki/Weapon_P.R.I.M.E._(Earth-616)?oldid=5573526"
Community content is available under CC-BY-SA unless otherwise noted.