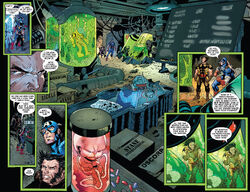 Weapon Plus Program's origins dated back to 1945, when Truett Hudson,[3] a civilian adviser to the U.S. Army nicknamed Professor Thorton, discovered Dr. Nathaniel Essex's hidden laboratory under a liberated concentration camp. Funded by the U.S. Government, Thorton formed Weapon Plus,[4] a Program devoted to create super-soldiers based on U.S. Army's Project Rebirth, which birthed the hero Captain America, retroactively considered to be Weapon I.[5]

In 1945, Thorton located another of Essex's laboratories underneath the Ravencroft Institute and commandeered it, allying with Count Dracula in an attempt to cure vampires of their weaknesses. This effort was foiled when Captain America attacked the institute looking for an army-buddy who had been abducted, and Jonas Ravencroft - the director of the institute - unleashed the grotesque abominations created by Weapon Plus' experiments on them.[6]

After the end of World War II, Weapon Plus focused its efforts on combating the U.S.S.R.'s Department X, until in 1965 an alien dragon made of living darkness was discovered by S.H.I.E.L.D. and codenamed the Grendel. Terrified by the prospect of an alien invasion, the Weapon Plus program metastasized into multiple installations each seeking a solution to this new threat.[7]

The first nine instalments of Weapon Plus had been partially successful, including Weapon III, which resulted in the creation of the Skinless Man,[8] and Project Homegrown, a.k.a. Weapon VII, which produced the cyborg Nuke.[9]

The Weapon X Program had two iterations, the first being started by criminal mastermind Romulus[10] and sponsored by the U.S. Government's Central Intelligence Agency,[11] while the second one was formed by Canadian government's Department K after the failure of the first installment.[12] Although the first iteration successfully applicated the Adamantium bonding process to the mutant Logan, he later escaped the Weapon X Facility.[13] The results of Weapon X's experiments on Logan were used by Department K to start a new installment, which resulted in the creation of Deadpool.[12]

The American Weapon X Program later broke off from the Weapon Plus Program when Plus' overseer John Sublime notified Weapon X director Professor Thorton that his superiors wanted the project to shut down.[4]

To prevent subsidiary programs from going rogue, Weapon Plus directly oversaw the creation of the last living weapons operating in the clandestine facilities of The World, employing Bolivar Trask's Sentinel technology.[14]

Throughout the decades, Weapon Plus has used increasingly more extreme methods to create its super soldiers. Weapon X employed genetic alteration, brainwashing, and memory implants. The latest creations were bred specifically to become mutant-hunting weapons much deadlier than Sentinels.[5]

Project Rebirth created the icon known as Captain America,[15] and was considered by Weapon Plus to be its most successful product.[5]

While reports stated this phase of the Weapon Plus program additionally focused on animals,[16] its subject was instead a mutant named Harry Pizer a barrister during the Cold War with elastic and multi-sensory skin who had his powers augmented.[8][note 1]

While initially reported to have been performed on various ethnic groups and prisoners,[16] Weapon IV, also known as "Project Sulfur" - was spearheaded by Theodore Sallis and developed the SO-2 serum that turned him into the Man-Thing.[17]

While reported to have been performed on various ethnic groups and prisoners,[16] Weapon V - also known as Project Venom - originated as the Sym-Soldier Program spearheaded by Nick Fury during the Vietnam War, and involved bonding wounded soldiers to symbiotes.[19][17] After the failure of the Sym-Soldier prototypes, Weapon Plus took over from S.H.I.E.L.D. and began engineering symbiote super-soldiers using research from government and military super soldier programs such as Project Rebirth 2.0, Mercury Team, and the Anti-Symbiote Task Force.[20][7]

Weapon V was decimated when Carnage attacked the headquarters and slaughtered the majority of the personnel present, killing Mars Team and project head Dr. Andrew Breen two days later. In light of the threat posed by Carnage, Professor Junger placed Weapon V on hold and had Weapon Plus' remaining samples of the Grendel symbiote put in stasis.[7] After Carnage's defeat, Professor Junger restarted the program with Dr. Pierce replacing Dr. Breen as the head researcher.[21]

Weapon VI, a.k.a. Project Power, was spearheaded by Dr. Noah Burstein and was the procedure that gave Luke Cage his powers.[17]

Weapon VII, better known as Project Homegrown, experimented on human soldiers during the Vietnam War. Some of the known participants who died in Project Homegrown included Andrew Perlmutter, Michael Labash, John Walsh, James MacPherson and fourteen other unknown recruits. The only known successful subject of Project Homegrown was Sgt. Frank Simpson codenamed "Nuke", who had armored implants under his epidermis and was given Adrenaline Pills to alter and control his mood. Logan, who would later become one of Weapon Plus' victims, kidnapped Nuke as a child, who oversaw his conditioning.[9]

Weapon IX, better known as Project Psyche, was a psychological program ran by Dr. Michael Hunt. His work led to the creation of Typhoid Mary.[17]

Weapon X was started by Professor Thorton under Romulus' orders.[22][3] Weapon X operated in both Canada and the United States through an agreement between C.I.A. and Canadian Government.[11] It was designed to employ and empower mutants whose memories were often altered or deleted via several methods, including elaborated sets,[11] and psychic implants provided by Aldo Ferro.[23]

For a long time Weapon XI remained a mystery,[4] but was revealed to be another stage of the project created by Romulus.[3] He used Wolverine's son Daken and bonded his bones to the Muramasa metal in hopes of creating a warrior the can take down Logan.[24]

Weapons from The World

The following weapons were created under the direct influence of the Sublime bacterium and inside The World, a facility originally based in Britain, that warped time to grow and develop an entire civilization solely for the production of super-soldiers. The result was to be a team called the Super-Sentinels, a mutant-hunting team of "superheroes" with a base in a Weapon Plus space station. This team, a brainchild of John Sublime, was intended to be a publicity stunt that would commercialize the genocide of mutants as part of a reality show. This was supposed to make it more palatable to the public.[25]

Weapon Plus created Weapon XII (aka Huntsman, real name Zona Cluster 6) at the England-based facilities of The World. He was the first living weapon created employing artificial evolution and nanosentinel technology. Weapon XII was "accidentally" unleashed on the Channel Tunnel and fought X-Corporation members Cannonball, M, Darkstar, Rictor, Siryn, and Multiple Man. Weapon XII was eliminated by Fantomex with the aid of Jean Grey and Professor X, but at the cost of Darkstar's life.[26]

Weapon Plus created Weapon XIII Fantomex, whose real name is Charlie Cluster-7, also at The World. However, Fantomex rebelled against his creators. Like in the case of Weapon XII, Fantomex's powers derive from nanosentinel technology.[16]

Weapon XIV was created in The World by John Sublime using ovaries stolen from Emma Frost to create daughters/clones the Stepford Cuckoos. Originally numbering in the thousands, only 5 were active. They were created to entrap the Phoenix Force to use its power to fuel their psychic abilities so they can wipe out all mutants on earth.[9]

The "ultimate" creation of Weapon Plus designated Weapon XV, a.k.a. Ultimaton, designed to be the Super-Sentinels' grand powerhouse.[14]

Weapon XVI is a "living religion", a virus that attacks the "faith reserves" and makes them subservient to the World's sentience. For it to work one has to believe in some sort of god.[2]

While the project was underway various groups and factions. including some within the participating governments, funded the creation of a separate initiative to make countermeasures for the Weapon Plus Programs. Members of the Weapon Plus Projects were completely unaware that the schematics of their projects were given to Weapon Minus to construct fail-safe for their products.[citation needed]

A robot originally made by a paranoid Professor Schumann who was worried that super-soldiers would take over the world. It was never deployed, having been built in secret and housed in Schumann's old residence until it was activated by a desperate S.H.I.E.L.D. agent looking for revenge. The only known product was TESS-One.[27]

A number of scientists were funded by SHIELD to create counters to the Weapon Plus program in case it went off the rails. In what was then explicitly labelled the Weapon Minus program, one of these scientists when his branch of the project had his funding and materials cut was forced to test the resultant mixture of Super-Soldier Serum and LSD on himself, the result was named Doctor Mindbubble. He was intended to counter Weapon VII.[citation needed]

Equipment: State-of-the-art and sophisticated equipment.
Transportation: Various
Weapons: Military standard when not accounting for weapons equipped to the Super Soldiers and those geared to take down the super-soldiers themselves

Retrieved from "https://marvel.fandom.com/wiki/Weapon_Plus_(Earth-616)?oldid=5849029"
Community content is available under CC-BY-SA unless otherwise noted.