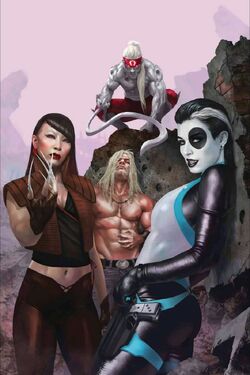 The team of mutants that would form Weapon X first banded together as a consequence of the mutant-hating organization of the same name either hunting them down or harvesting their genetic material with Adamantium-laced killer robots. First, Logan and Sabretooth joined forces with Domino.[4] These mutants eventually teamed up with the Hulk after he became one of Weapon X's targets.[5] While raiding a Weapon X lab, Warpath and Lady Deathstrike were rescued from containment.[6]

Hulk and the mutants' ensuing investigation led them to the Weapon X Central Command in Serenity Hills, Texas,[7] where they came face to face with Weapon X's most successful Wolverine/Hulk hybrid, H-Alpha. Following the destruction of the base and H-Alpha's escape, Hulk walked away on the mutants. Sabretooth encouraged the team of mutants to do what needed to be done, starting by taking back the name Weapon X, officially becoming a team.[2]

After tracking down H-Alpha and freeing him from the control of Dr. Alba with the help from Wolverine,[8] Weapon X answered a distress call from the mutant community of Santo Marco. Their actions resulted in the death of the tyrant dictator Emilio Duarte.[9]

Citing his ailing health, Logan ceded field leadership of Weapon X to Sabretooth. For the team's first mission without him on the field, Logan deployed Weapon X in Siberia to kill Omega Red, who had taken over the Stranniy Corrective Labor Camp for mutants.[3] Instead of killing Omega Red, Sabretooth decided to form an alliance with him to take down the person pulling his strings, Omega Red's estranged brother and director of S.I.C.K.L.E., Vassily Rossovich.[10] Warpath quit the team, and tried to stop the rest of his teammates from helping Omega Red take down S.I.C.K.L.E. fearing an international conflict could result from it.[11] Following Director Rossovich's death, the rest of Weapon X effectively cut ties with Logan. They decided to become mercenaries together with Omega Red, and in the process re-branded themselves as Weapon X-Force.

Mystique joined the team as the one in charge of receiving their contracts after Sabretooth finally accepted her offer to start taking mercenary jobs again.[1] After weeks of successful missions and finally getting her payday, Domino was ready to resign from the team since she had more than enough money. She chose to stay when she heard their next mission was to rescue Monet St. Croix who was said to be Sabretooth's ex girlfriend, which Domino found adorable. They successfully saved Monet form the Church of Human Potential, a cult led by Reverend William Stryker.[12] and she subsequently joined the team, along with Deadpool, whom Sabretooth bribed into joining.[13] Their final mission was to bring down the cult and kill Stryker for good, a battle which lead them into the depths of Hell.[14] [15] [16]

While they were successful in accomplishing their goal, it came at a price for Sabretooth, who was killed in his battle with a power-boosted Mentallo and sent back to Hell. His last act of heroism was to revive his son Graydon, whom he'd found earlier. Marduk Kurios came to claim him but he was in a lobotomized state & could only growl. Marduk concludes that his inversion has finally been undone but doesn't want to claim Victor in such a state. As a result, he released him into the Saskatchewan woods to embrace his true self and earn his way back to Hell. With Sabretooth gone, the team disbanded.[17]

Retrieved from "https://marvel.fandom.com/wiki/Weapon_X-Force_(Earth-616)?oldid=6098084"
Community content is available under CC-BY-SA unless otherwise noted.