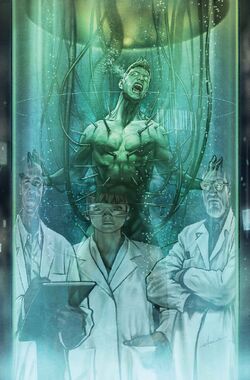 Weapon X was a code name for a secret U.S. Government project intended to deliberately induce superpowers for military purposes. It was the tenth installment of the Weapon Plus Program. In the case of Weapon X, the mechanism was genetic engineering, specifically, creating mutations in normal humans and enhancing existing mutations. The successive projects had Roman numerals, so Weapon X was the tenth such project. Some confusion has arisen because this same name has applied to several different projects as well as several of the project's "graduates."

In 1968 Romulus had Weapon X operatives in Dallas, Texas, experimenting on Logan with Carbonadium pills;[5] Team X later had a mission in Berlin, where they obtained the Carbonadium Synthesizer and C.I.A. double agent Janice Hollenbeck;[5][9][10] they were opposed by Omega Red, but they successfully escaped while Wraith distracted him.[8] Team X later disbanded after that mission, with Logan and Creed returning working for Romulus while Maverick, Mastodon and Wraith remained under C.I.A.'s authority. The Weapon X Program then continued operating under the cover of the U.S. Department of Agriculture.[2]

In the 1970s former Team X member Logan briefly joined Canadian's Department K as an intelligence member,[11] also working with C.I.A. agents Richard and Mary Parker.[12] During this time, Department K found a way to replicate Logan's healing factor and implement it into other subjects; one of such subjects was Wade Wilson, a man who suffered from cancer who had enlisted in Department K searching for a cure. Weapon X implemented healing factor in Wilson's body, temporarily regressing his cancer.[13] Department K then formed an early installment of Weapon P.R.I.M.E. squad composed by Wilson, Sluggo, Kane and Slayback; they were later joined by Wade's girlfriend Vanessa Carlysle, codenamed Copycat. Under unknown circumstances, Wilson killed Slayback during a mission;[14] his health then got worse and worse, so he was taken to the Hospice, a Weapon X Facility directed by Dr. Emrys Killebrew and his assistant Francis Fanny, codenamed Ajax. There, Killebrew and Ajax made terrible experiments on Wilson, who was also tortured by Ajax. Adopting the name Deadpool, Wade led a massive breakout from the Hospice, and the Canadian branch of Weapon X was shut down afterwards.[13]

Meanwhile, criminal mastermind Romulus eventually decided to revamp a new iteration of Weapon X,[4] again formed by Truett Hudson, a.k.a. Professor Thorton, F.B.I. scientist Dr. Abraham Cornelius and former N.A.S.A. operative Carol Hines.[1] This installment, codenamed Experiment X, operated in a Department K Facility[15] located near Roanoke in Alberta, Canada.[16] Agent Logan was selected by Romulus as the first Experiment X's subject; he was captured by Weapon X agents and taken to the facility, where Hudson and Experiment's staff bonded Adamantium with Logan's skeleton; under Weapon X's control, he slaughtered the entire population of Roanoke;[17] made insane for his pain, Logan broke free and escaped from the facility, killing several Project members,[18] including Dr. Dale Rice,[19] and nearly killed Malcolm Colcord, the head of security.[20]

After Logan's run from Experiment X, The Professor continued working on the Program, eventually recruiting Maverick again,[21] and training him to be Aldo Ferro's personal bodyguard.[22] The Professor was then contacted by John Sublime, his former assistant and new leader of Weapon Plus Program, who wanted to shut down Weapon X due to its failures. The Professor then officially broke off Weapon X from Weapon Plus.[21] At that point, Weapon X re-assumed the guise of U.S. Department of Agriculture, secretly working in the United States and Canada under C.I.A.'s protection.[23]

Many years later, Logan, now the X-Man known as Wolverine, started remembering events from his past, eventually leading him to the Weapon X Facility in Alberta.[24] At the same time, Silver Fox, now a powerful leader of Hydra, had started secretly following U.S. Agriculture Department's activities, searching for the Professor to kill him for the treatment she received during her time at Weapon X Program.[2] Meanwhile, former Dr. Cornelius' assistant Hines contacted the Professor at Agriculture Department, informing him that Logan had discovered something about his past at Weapon X.[25] After having read N.S.A. files provided by S.H.I.E.L.D. Director Nick Fury, Logan searched for the Professor in Washington, D.C.'s Agriculture Department's Building; after Logan's visit, he decided to reach former Weapon X memory implants' set in Windsor, Ontario, since he knew which could have been Logan's next place to visit. He then activated the S.H.I.V.A. Protocol, a security program composed by several robot units used by Weapon X to capture agents which had escaped their control; Logan destroyed the first S.H.I.V.A. units and reached the Control Room, where he found Hines and the corpse of the Professor, who had been successfully killed by Silver Fox minutes before.[2]

Sabretooth was successfully found by a survivor S.H.I.V.A. unit in a Wrestling Club in New York City; he was helped by his former Team X teammate John Wraith,[26] who also gathered Logan, Mastodon,[8] Silver Fox and Carol Hines to reform the old Team X for the last mission: found the man who was behind their implanted memories: Aldo Ferro. They arrived in Ferro's private island in Seattle, Washington, where they met their former teammate Maverick, who was employed by Weapon X Program to be Ferro's bodyguard.[22] After Ferro revealed that, during his time at Weapon X, had implanted false memories in all of their minds, Maverick rejoined Team X and, together, they fought Ferro, who killed Hines when she revealed he was an alien called the Psi-Borg; then, he vanished bringing Silver Fox with him.[7] He then appeared, revealing his true form as the Psi-Borg and creating an illusion which was a replica of Logan and Silver Fox's time at their cabin in Yukon; then, he mentally controlled Sabretooth into killing Silver Fox for the second time, finally disappearing with Creed.[27] He will be later helped by Sabretooth escaping the United States.[28]

After this Program's incarnation's failures, Weapon Plus' Director John Sublime, contacted former Weapon X's head of security Malcolm Colcord, who had been nearly killed by Logan when he escaped after the Experiment X, asking him to be the new Director of Weapon X Program.[21]

He gave the project two additional goals: to monitor mutants in the general population and to set up concentration camps where they would be recruited, held for study, or executed. Colcord brought in Brent Jackson, a former agent of S.H.I.E.L.D., as well as Sabretooth, Deadpool, Copycat, and Mauvais.[29]

The new Weapon X team's first success was to psionically gain control of Wolverine and direct him to track down the "alumni" of previous Weapon X projects. They were forced to detain him, though, when he regained his volition. The Shiver Man freed Wolverine, upon which Colcord and the others fled.[30]

Colcord next brought in Box to build a concentration camp called Neverland. The Weapon X project had reached the height of its power. They recruited Aurora, Sauron, Mesmero, Marrow, Wildchild, Washout, Garrison Kane, and many more mutants. Some joined willingly. Most did not.

Cable organized the Underground, a mutant movement to counter the atrocities going on at Neverland. With assistance from Agent Jackson, they led an assault on Neverland, in which Kane was killed. Jackson's help, however, was a ploy to help him take over the Weapon X project.[31] Learning of the camp, the X-Men sent Chamber there undercover. Jackson ordered him to assassinate Sublime, at which point Chamber disappeared[32] -- as did everyone else at Neverland. The Weapon X project moved to another facility they named the Program.

Jackson scored another success when he subverted Maverick, who arrived at the Program in critical condition after a battle. In exchange for his life, Maverick agreed to another treatment and became Agent Zero. Now working for Jackson, he neutralized Marrow's team. Apparently considering the debt satisfied, he teamed with Wolverine and Fantomex (a product of the Weapon XIII project) to uncover the truth about Weapon Plus. They found Neverland and the Program abandoned[33] but managed to track down Sublime. Only then did Wolverine learn what had happened at Roanoke.

A new Weapon X project, whose staff included Dr. Martin Sutter, Dr. Sarah Kinney, and Dr. Zander Rice (son of Dale Rice), followed. They produced Native, who was rescued by Wolverine and Sabretooth, and a female clone of Wolverine, X-23, who escaped after killing Rice and Kinney.

Later, Colcord and Jackson appeared to be running separate, competing Weapon X projects. Also, Nathaniel Essex (Mister Sinister) was still working with the project, using the name Dr. Robert Windsor. Sinister's journal, chronicling his experiments in a Nazi death camp, inspired Thorton to work on one of the original projects; the full extent of Sinister's influence on the Weapon X programs is still unknown.

Under the direction of Reverend William Stryker, a new Weapon X program emerged, which focused on the creation of undetectable killer cyborgs that could eventually eradicate mutantkind. These cyborgs were created from regular humans Stryker lured into his cause.[34] As part of the process to refine their cyborgs, Weapon X targeted several mutants with special abilities of their interest, namely Logan, Sabretooth, Warpath, Domino and Lady Deathstrike.[35]

Once Weapon X captured Lady Deathstrike and harvested genetic material for their cyborgs, they sent their robots after the remaining four targets. While they failed to capture Logan and Sabretooth, they acquired tissue samples.[36] Meanwhile, Warpath was successfully apprehended.[37] By the time Weapon X's cyborgs attacked Domino, Logan and Sabretooth had joined forced to investigate their attackers, and managed to rescue her. In order to improve the resistance and strength of the cyborgs, Weapon X set their sights on the Hulk.[38]

Even though the cyborgs that attacked the Hulk managed to have a blood sample sent to their command center before being defeated and forced to self-destruct, their attack prompted Cho to investigate the situation and join forces with Weapon X's other targets. Data retrieved from a partially preserved cyborg allowed Hulk and his new allies to determine the location of one of the cyborgs' production centers.[39] When said facility was raided by Hulk and the mutants, Stryker had it self-destruct, killing its employees in the process. The mutants and Hulk survived, and even managed to rescue Warpath and Lady Deathstrike from containment.[40] With the Hulk's blood sample still in their possession, Weapon X moved to the creation of mutant-Hulk hybrids.[34]

After further investigating Weapon X, Hulk and the mutants located and raided their central command, forcing most of the facility to be evacuated. Weapon X's leading scientist, Dr. Alba had already finished experimenting on her best and last two subjects, H-Alpha and H-Beta,[41] who were eventually released to confront the intruders. H-Alpha proved to be much less docile, to the point of killing H-Beta and attempting to turn on his creators. Hulk held him back, giving Stryker, Dr. Alba, and the remaining staffers the chance to flee in a helicopter. During the ensuing fight between Hulk and H-Alpha, Weapon X's central command collapsed.[42]

Retrieved from "https://marvel.fandom.com/wiki/Weapon_X_(Earth-616)?oldid=5273961"
Community content is available under CC-BY-SA unless otherwise noted.