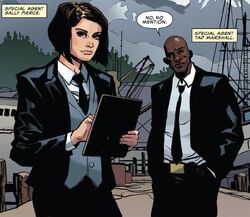 Weapon X had implanted a mutant named Logan with adamantium claws and skeleton, turning him into a weapon and erasing his memory multiple times.[1] After serving them for many missions, Logan managed to escape and went on the run, knowing that Weapon X would never stop seeking their property.[2]

Responding to a massacre on a fishing boat near Burns, Alaska, in which the killer fit Logan' profile,[3] Weapon X send two Human-looking Sentinels presenting themselves as FBI agents Tad Marshall and Sally Pierce to investigate. Pierce was a Sentinel of a traditional model, while Marshall had experimental empathetic programming, which made it much easier for him to relate to Humans, but also caused him to increasingly empathize with Logan.[1] After a lenghty investigation of a series of local crimes, they discovered that Logan was waging a war against the drug smuggling operation run by the Langrock family, a member of which named Hudson Langrock had also committed a series of brutal murders in the area due to recently being turned into a Wendigo.[4]

After evading the two agents for some time, Logan had kidnapped Agent Marshall and offered him a deal: to claim that Logan was killed by drowning and bring the Wendigo, whom Logan subdued with a tranquilizer, into the Weapon X in his stead. Believing that Logan could do more good while on his own, Marshall upheld his end of the bargain, but had to delete a portion of his memory to cover his tracks, arousing suspicion of his superiors. Pierce interrogated her partner and eventually managed to convince him to reveal the truth, after which she deactivated Marshall and continued her hunt for Logan.[1]

Retrieved from "https://marvel.fandom.com/wiki/Weapon_X_(Earth-TRN744)?oldid=5247229"
Community content is available under CC-BY-SA unless otherwise noted.