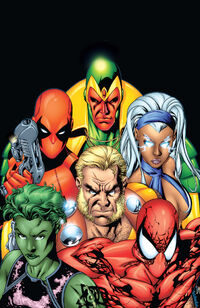 Enemies
Anyone who keeps them from going home including the Exiles and Timebroker.
Origin

Origin
A multiversal team similar to the Exiles but formed to take on more ruthless, bloody and destructive missions

Place of Formation
The Ocean Beyond Space and Time

This Weapon X team is a more ruthless version of the multiversal travelers and realities-fixers, the Exiles.

The founding members were; Kane, Deadpool, and Sabretooth.[1]

The team was eventually destroyed, when the Timebroker wanted to downsize both teams in hopes of killing off Hyperion.[13]

Equipment: Varied
Transportation: Teleportation through connection to the Tallus as well as individual members own means.
Weapons: Each team members' arsenal.

Unseen missions that Weapon X, were known to have completed are:[16]

Retrieved from "https://marvel.fandom.com/wiki/Weapon_X_(Multiverse)?oldid=5483261"
Community content is available under CC-BY-SA unless otherwise noted.