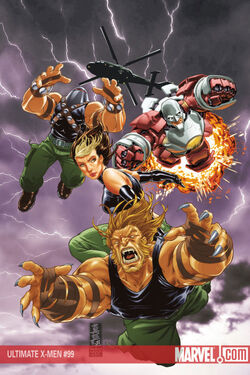 During the Second World War, Canadian and US governments decided to create super-soldiers in an attempt to defeat the Nazis. Canadian paratrooper Corporal James Howlett was abducted and sent to a remote facility, later known as the Weapon X Facility. There, Canadian scientists discovered a genome that, if genetically altered, would grant a person superhuman abilities. Howlett became the first "mutant" and was dubbed Mutant Zero. This genome was released and spread around the world to create the race known as mutants. Some time later, Mutant Zero was freed by young mutant Erik Lehnsherr, son of Weapon X scientists, who was horrified by his treatment and killed his parents after helping Mutant Zero escape.

Many years later, Weapon X was revived by Colonel John Wraith, who had Howlett recaptured and Adamantium bonded to his skeleton. His memory was wiped and was given the fake name "Logan" (as well as the Codename Wolverine). He was reprogrammed as a living weapon and was used for various missions during the Gulf War. While he was being deployed in the desert, his vehicle was ambushed by an Iraqi guerrilla and broke out of his cage. Wolverine slaughtered the enemies and noticed his old army friend Nick Fury was injured. Rather than escape, he carried Fury across the desert back to base. He was thanked by being shot in the head, re-caged, and sent "home". While with Weapon X, he was often tortured and tormented by Wraith and his men and developed a hatred for fellow captive Victor Creed (codenamed Sabretooth), who worked voluntarily with Wraith as he enjoyed the violent nature of their work. The latter, who was referred to as a "poor man's Wolverine" by Wraith, had his memory erased as well, though he often bragged that he remembered murdering Wolverine's wife and son. Creed also attempted to one-up his enemy by receiving Adamantium implants and claws (four for each arm, unlike Logan's three). A few years later, Wolverine escaped with the help of Fury.

During the 2000s, Weapon X was operating under SHIELD as a barely controlled subdivision that acted as a counter terrorism unit exploiting captive mutants for its own purposes. Some of its captives were Rogue, Nightcrawler, and Juggernaut. Rogue used her powers to obtain information about the location of Xavier's School and the X-Men were captured, except for Wolverine (who had become a member). The latter allowed himself to be captured, and confronted Wraith and Sabretooth once more. Unbeknownst to Weapon X, Wolverine was implanted with a tracker so SHIELD and the Brotherhood could obtain his location. Sabretooth taunted his foe, burning the only documents of his past right before his eyes. They began to fight, with Wolverine gaining the upper hand. The X-Men were then rescued by the Brotherhood and SHIELD while Weapon X was dismantled with its captives set free. Wraith was apparently killed, but secretly survived and became a member of Alpha Flight.

Like this? Let us know!
Retrieved from "https://marvel.fandom.com/wiki/Weapon_X_Project_(Earth-1610)?oldid=6467954"
Community content is available under CC-BY-SA unless otherwise noted.