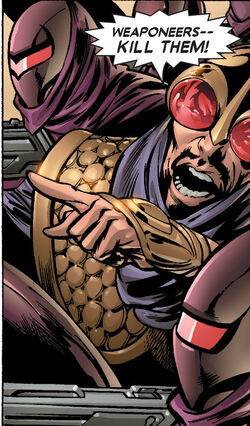 The Weaponeers are a group of arms dealers and weapons experts who use their superior technology to terrorize people and countries.

They first encountered the X-Treme Sanctions Executive when they assaulted the citizens of the Central Saharan Republic, claiming the land and people under the reign of Achmed Al-Khalad. Most of them, including their sergeant, were captured, by some were into a plane with the captain of the team flee out, teleporting out from Cannonball's attacks.

They were later hired by the Hellfire Club led by Sat-Yr-Nin, who wanted to conquer Genosha in using Zanzibar as an advanced base. They were confronted to the Genoshan Excalibur, Mutantes sans Frontières and one of his member, Jono Baraka, president of Tanzania and also known as the mutant superhero Askari the Spear. The Weaponeers ended up double-crossing Viper and Sat-Yr-Nin. In retaliation, Viper shot Scimitar in the back, killing him.[1]

During an attempt to take control of the nation of Zanzibar[2], they were confronted to the X-Men Psylocke, Bishop, Marvel Girl and Storm.

The X-Men were close to victory when the Scarlet Witch warped the reality into a mutants-domined Earth.

Their currents whereabouts are unknown.

Like this? Let us know!
Retrieved from "https://marvel.fandom.com/wiki/Weaponeers_(Earth-616)?oldid=5552292"
Community content is available under CC-BY-SA unless otherwise noted.