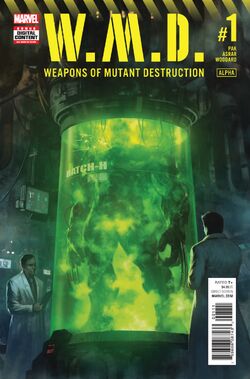 After fending off an attack from two of Weapon X's killer cyborgs, the Hulk tracks down a group of mutants which had also been targeted by Weapon X, namely Logan, Sabretooth and Domino. The two former even had genetic material harvested from them to enhance the cyborgs' abilities. Using a partially preserved cyborg he managed to salvage from his fight, the Hulk determines the location of the cyborgs' command center. Meanwhile, a blood sample from the Hulk taken by Weapon X from the scene of the attack makes it way to said facility.[1]

Hulk and his allies attack the laboratory, located in a retrofitted Roxxon oil rig. After defeating guard cyborgs and freeing Lady Deathstrike and Warpath, two mutants which had been used by Weapon X for the refinement of their robots, they attempt to interrogate the facility's chief scientists. Weapon X's director, Reverend William Stryker, has the oil rig self-destruct, taking its employees with it. Hulk and the mutants survive the explosion, as well as the Hulk's blood sample, which is preserved by a drone.[2]

With his alliance with Logan, Sabretooth, Domino, Lady Deathstrike and Warpath consolidated, the Hulk continues investigating Weapon X with the partially preserved cyborg. Using a stasis formula similar to one patented and developed by Roxxon, Amadeus gets the cyborg to regrow its face so they can determine his identity, that of Dave Andrews, and from there find out who turned him into a killing machine.

Concluding that Weapon X must be using an enormous amount of stasis formula for their cyborgs, Amadeus finds about a company named Omitek which was forced to destroy an entire stock of knock-off stasis fluid in order to solve a patent infringement dispute with Roxxon. The lack of records of final disposal of the raw materials used to make the fluid prompt the heroes to investigate Omnitek.

While Amadeus and Lady Deathstrike break into David Andrews' house looking for clues, Logan, Sabretooth, Domino and Warpath investigate Omnitek's laboratories. They are attacked by a group of cyborg cat sentries inside the empty facility, and manage to find shipping manifests of the raw materials after taking care of the attackers. Meanwhile, the scientists at Weapon X have already moved into the creation of Hulk-mutant hybrid cyborgs.[3]

Logan and his team make a detour to Santo Marco, where they discover Weapon X has already moved to test runs, having killed a local mutant hero for the sake of it. After investigating a church David joined, the Church of Human Potential, Cho and Lady Deathstrike track down his brother Bobby. Amadeus attempts to reason with him and convince him not to join Weapon X. However, a recruiter named Carla arrives to pick up Bobby, and has an prototype Hulk cyborg attack the hero. The cyborg is defeated, but Bobby escapes after Hulk has to stop Lady Deathstrike from trying to kill the boy.[4]

While Bobby is transported to the Weapon X Central Command by Carla, Cho and his team debrief each other and continue investigating. Domino and Warpath break into a secret headquarters of the Church of Human Potential in order to acquire a membership list while Logan and Sabretooth interrogate an Omnitek accountant to learn about the disposal of the raw chemicals. Having surveillance on said accountant and finding out that he was being interrogated, Weapon X scientists detonate nanobots in his body to prevent him from talking, causing him a fatal aneurysm. Weapon X subsequently takes care of roughly two dozens of people in the same way to cover their tracks. After analysing data from those other deaths and the membership list acquired by Domino and Warpath, Cho pins down the location of Weapon X's headquarters in Texas.[5]

The heroes proceed to fly to the Weapon X Central Command located within a gated community inside Serenity Hills, and in the process discuss what to do with the villains. While most of the mutants agree with eliminating Weapon X with extreme prejudice, Cho argues they don't know the level of involvement of all members of the staff in the organizations inhuman experiments. Meanwhile, Weapon X begins experimenting on Bobby Andrews and a fellow test subject, being one step closer to perfecting their Hulkling cyborgs.[6]

Hulk and his allies break into Weapon X's center and rampage their way through the facility to locate Bobby Andrews in Vat H while Stryker and some members of the staff proceed to escape. As Hulk, Warpath and Domino confront Dr. Alba's failed experiments which she released to buy time to finish the incubation process of Bobby Andrew's new form, Logan, Sabretooth and Lady Deathstrike slip away to stop Stryker and kill him. When he notices his allies were deviating from the plan, Hulk does the same and stops them from killing Stryker. Unfortunately, these distractions gave Doctor Alba the time she needed to release Bobby Andrews, now mutated into the monstrous H-Beta.[7]

Domino and Warpath hold off H-Beta until Hulk arrived to assist them. Cho attempts to appeal to H-Beta's human side even though Dr. Alba ensures the process he underwent excised of most of his brain functions save those that powered survival-based emotional responses like anger. When the tremors casued by the fight begin to crack open the ground around the facility, the mutants help save civilians. Hulk is eventually forced to let loose in order to be evenly matches, taking the fight outside the base in the process, which gave Dr. Alba the opportunity to release H-Alpha. As soon as he joined the brawl, H-Alpha beheaded H-Beta due to his programming to act as an apex predator.

Dr. Alba soon learns H-Alpha is not as docile as he thought when he attempts to turn against his creators. Hulk manages to hold him back, giving Dr. Alba and Stryker enough time to fly away in an helicopter. As Hulk and H-Alpha continue fighting, what's left of the Weapon X facility is destroyed. The staffers who didn't evacualte already are saved by Warpath and Domino. H-Alpha abruptly stops fighting, pulls back his claws and escapes jumping away. Logan attempts to cheer up Amadeus, reminding him they managed to destroy the facility and save civilians, with the only objective left being to prevent Weapon X from taking control of H-Alpha. However, Amadeus angrily walks away on them.

Sabretooth encourages the team of mutants to do what needs to be done, starting by taking back the name Weapon X.[8] 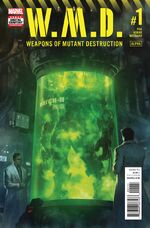 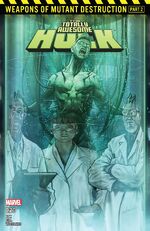 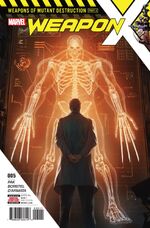 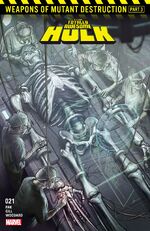 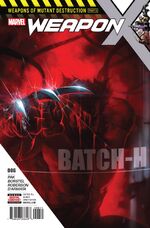 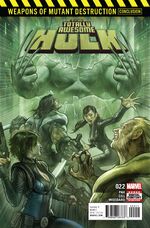 Retrieved from "https://marvel.fandom.com/wiki/Weapons_of_Mutant_Destruction?oldid=5532291"
Community content is available under CC-BY-SA unless otherwise noted.