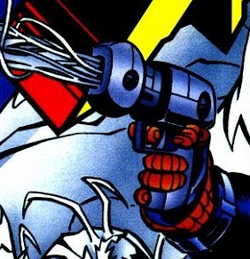 Creation of the Gun, and Spider-Boy's Webs

When Spider-Boy returned to Project Cadmus, he was given a special pistol made for him called a "web-shooter", which fires strands of synthetic webbing.

Web fluid is a shear-thinning liquid (virtually solid until a shearing force was applied to it, rendering it fluid) whose exact formula is unknown, but is related to nylon. On contact with air, the long-chain polymer knited and formed an extremely tough, flexible fiber with extraordinary adhesive properties. The web fluid's adhesive quality diminishes rapidly with exposure to air. (Where it did not make contact with air, such as at the attachment disk of the web-shooter, it remained very adhesive). After about 1 hour, certain imbibed esters cause the solid form of the web fluid to dissolve into a powder.

On Earth-TRN604, Peter Parker created pistol-like devices that were capable of shooting a special web fluid, when he became Web-Slinger. He always cared them everywhere as his personal weapons.

Like this? Let us know!
Retrieved from "https://marvel.fandom.com/wiki/Web-Pistol?oldid=6432061"
Community content is available under CC-BY-SA unless otherwise noted.