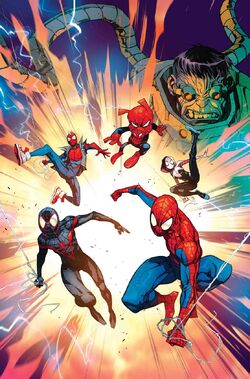 After the Inheritors were defeated by the Spider-Army, Spider-UK couldn't return to his reality because it had been destroyed in an Incursion. He decided to remain in Loomworld, the Inheritors' former base, and use the Web of Life and Destiny to travel the Multiverse protecting universes whose Spider-Totems had been killed by the Inheritors. Spider-Girl was willing to join him in order to better utilize her knowledge of the Great Web and the intricate related mythology due to her time in the Spider Society, and together they became the Warriors of the Great Web, a name christened by Karn, the Master Weaver.[1] Feeling this was too much of a mouthful, Spider-UK and Spider-Girl took to calling the team the Web-Warriors in honor of a team by that name established by the Miles Morales of Earth-1610 and Peter Parker of Earth-12041 during the Totem War.[3]

When the Multiverse was destroyed and recreated in the form of Battleworld, the Warriors of the Great Web were recreated in the domain of Arachnia. While trying to find out about her counterpart's life and death, Gwen Stacy snuck into Ozcorp's Special Projects division, and discovered Peter Porker. She escaped of the building after being discovered by Osborn, and was later found by Paviitr, Anya, and Billy. Prabhakar brought them to his hideout, where he had created a machine to track the exotic resonances of the spider-heroes in this dimension; the device subsequently picked up another Spider. The signal brought the spider-heroes to the Brooklyn Navy Yard, where they stopped the criminals Carnage and Tombstone, and discovered the origin of the signal, the Spider-Man from the Noir Universe. The spiders were soon interrupted by the arrival of the Sinister Six.[7]

The Sinister Six defeated the Spider-Men and brought them to Norman Osborn, who stated he wanted to help them and showed no ulterior motives. Using a similar procedure to Paviitr's, Osborn had developed lenses that could focus in fifth-dimensional space, and created the mapping of a tattered web that appeared to be the structure of the universe, using the resonances of the heroes. All of the spider-heroes but Gwen decided to stay at the Ozcorp Tower. When she went to the Mount Olivet Cemetery to visit the gravestone of her deceased counterpart, she was startled by the arrival of this domain's native Peter Parker. Gwen and Peter were soon attacked by Venom, who was sent by Osborn to follow Gwen at a discreet distance; and Peter, who had lost his powers a long time ago, was captured by him, but Gwen was able to save him and defeat Venom. Afterwards, Gwen devised a plan to defeat Osborn and put it into motion.[8]

Peter sent a photo of himself to Osborn, proving he was still alive and well, alongside a message for them to meet at the George Washington Bridge, which destabilized him. As he prepared himself and his Sinister Six to go after Parker, Anya Corazon took the other Spider-Men to see Norman's "Caesars Palace," which Porker mentioned to her when they were having lunch. Inside the room was the Siege Perilous, the chair reserved for the man who finds the Holy Grail, and hanging above it was a helmet linked to the the chamber where the energies of the web were being directed. According to Porker, whenever Osborn started to get really mad and complaining about how he was going to overthrow God Doom, he went to this room to sit in its chair. Suddenly, the room started to be filled by lightning bolts and a Thor appeared before them to reclaim the chair.[9]

Peter confronted Osborn in order to expose him as a mad man, and distract him long enough to help Spider-Woman, who had returned to Ozcorp Tower. The other Spiders were busy trying to prove the Thor they were not a threat, and Spider-Woman convinced Electro to help them by destroying the Siege Perilous to show the Thor they were on her side. The chair surged into a feedback loop that caused an explosion which destroyed the entire floor. Osborn returned shortly after, and took the advantage of all of the spiders being unconscious in the same place to tap into the chair's power. After being rescued by Spider-Ham, Peter disrupted the chair, knocking Osborn unconscious. The Sinister Six appeared immediately after the spiders had recovered, ready to destroy them now that Osborn was out of the picture. Paviitr threatened the Sinister Six with using the chair to boost their powers, and the villains called his bluff, prompting them to surrender. With Osborn defeated, the heroes concluded that the domain would go through dire times due to the lack of authority, but they were ready to help it.[10]

Following the restoration of the Multiverse, the Web-Warriors returned to the reformed Earth-001 and continued protecting those realities who had lost their Spiders.[11] The first major challenge they faced was the appearance of their counterpart composed of Electros from across different realities, the Electro-Verse.[12]

The Warriors of the Great Web first took notice of the Electro-Verse when the Spider-Women of Earth-65 and Earth-982, Gwen Stacy and May Parker, respectively, came across several Electros robbing silver on Earth-9105. The confrontation between the two Spider-Women and the Electros resulted in the capture of Gwen when they attempted to teleport away for reinforcements.[12]

While Stacy's teammates were investigating her disappearance on Earth-9105, and even came across a handful of Electros trying to retrieve the silver they were previously stealing, Gwen managed to convince a dissatisfied Electro, that of Earth-449, to free her and together overthrow the leader of the Electro-Verse. When they reached his base, Spider-Woman was surprised when she discovered their leader was a disembodied gestalt being known as the Battery.[13]

Loomworld was soon raided by numerous Electros who tracked down the energy signature of the Web-Warrior's bracelets, forcing the heroes to retreat to the rustic Earth-803 of Lady Spider. Meanwhile, Spider-Woman had failed to confront the Battery, and teleported to Earth-982 to seek the assistance of Ben Parker.[14]

Together with Ben, Spider-Woman and the rogue Electro visited Earth-112255, the location of the Eletros' navigation system, and destroyed it, leaving them blind to traverse the Web of Life and Destiny. In the course of this mission, they gained an ally, a benevolent alternate version of Doctor Octopus called Octavia Otto, who was being exploited by the Electro-Verse together with an army of Doctor Octopi.[15]

At the same time Spider-Woman and Octavia Otto attempted to use a tele-consciousness rig to erase the Battery's mind but failed, the rest of the Web-Warriors used a jerry-rigged contraption to contact the Electro-Verse and lure them to Earth-803. Almost the entirety of the Electro-Verse arrived to Earth-803, and the Warriors of the Great Web confronted them and held the line until they could create a Faraday cage using a special conductive webbing, in order to neutralize the Electros' power. Spider-Woman also forcibly teleported the Battery to the cage. However, in order to ensure the Electros remained trapped, Spider-UK and May Parker remained trapped within the cage.[16]

The Web-Warriors returned to Earth-001, but soon discovered they couldn't return to Earth-803 or track Billy and May's bracelets.[17] Additionally, the Web of Life and Destiny began to deteriorate, causing realities to bleed together.[18] Karn and Octavia Otto managed to fix the Web, but tangled it at the same time, causing the Web Warriors to become split between realities while they were assisting Spider-Punk's home reality from being invaded by forces from other universes. Karn's reconnection of Earth-803 into the web also caused an earthquake that destroyed the Faraday cage and freed the Electros.[19]

The Spiders in the Noir Universe investigated the unexpected technological growth in this universe, a consequence of the bleeding between realities which left an alternate spider-powered version of Harry Osborn stranded in the Noir universe.[20] This seemingly friendly Osborn knocked out the heroes and showed his true nature after the damage to the Web was explained to him. Osborn concluded the damage to the Web of Life and Destiny was a consequence of the Web-Warrior's very own reality-hopping, wishing to exact revenge on the Web-Warriors for indirectly having separated him from his home reality, where he was on top of the world.

Meanwhile, the heroes in Spider-Punk's universe found a way to use the MegaMorph to re-establish connection with the rest of the Web-Warriors and return to them. At this same time, Octavia began to recruit Spider-Men and Women from across realities to assist Spider-UK and Spider-Woman in holding the line against the Electros. On her way to Earth-803, she rescued Gwen from Spider-Ham's world.[21]

The ensuing fight between the Electros and Spider-People was a close match until the Battery got hold of the MegaMorph. Additionally, the megalomaniac Harry Osborn reverse-engineered the Spider-Men's bracelets and used the technology to travel to Loomworld to destroy the Web. As a last resort to defeat the Battery, Ben Parker used the previously-stolen tele-consciousness rig to have his mind absorbed into the Battery. The presence of Ben's conscience drastically altered the Battery's personality, and they demanded their fellow Electros to stop fighting.

As commanded by the Battery, the Electros unleashed their electrical capacity across the Web of Life and Destiny to untangle it and save it from being destroyed by Harry Osborn, who was eaten by Karn. With both crisis adverted, the Web-Warriors returned to Loomworld with the new recruits, and set out to continue protecting the Multiverse from any threat that endangered it.[6]

When the Inheritors escaped their prison on Earth-3145, the Warriors of the Great Web began reassembling the Spider-Army and recruiting new Spiders from across the Multiverse.[22]

Later on, the Peter Parker of Earth-616 recruited Miles Morales, Gwen Stacy, Spider-Punk, and Spider-Ham together in order to search for a loose end from his past; Gog.[4]

Retrieved from "https://marvel.fandom.com/wiki/Web-Warriors_(Earth-001)?oldid=5756702"
Community content is available under CC-BY-SA unless otherwise noted.