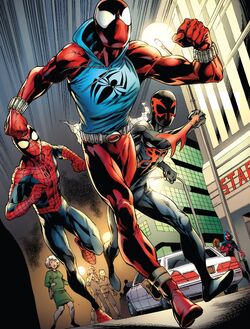 The Web Spinners are a group of roughly half a dozen of novice powerless vigilantes inspired by Spider-Man who patrolled the streets of Las Vegas searching for crime.

The other two Web Spinners were rescued by Scarlet Spider, who gave them enough time to escape. Scarlet Spider later caught up with them to try to get them to stop their enterprise. Before the Scarlet Spider left, the Web Spinner dressed in a replica of his original costume criticized his current attire, for which Ben forced him to give him his suit.[1]

Retrieved from "https://marvel.fandom.com/wiki/Web_Spinners_(Earth-616)?oldid=4078935"
Community content is available under CC-BY-SA unless otherwise noted.