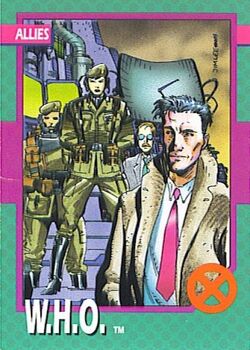 The Weird Happenings Organisation is a British Military organisation set up by the twins Alistaire and Alysdane Stuart. W.H.O’s mission is to investigate people, places, things, and events that occured outside the normal realms of possibility, and to deal with them if needed.[2]

It has assisted Excalibur and other British superheroes on numerous occasions.[3] After Brigadier Alysdane Stuart was murdered, it was incorporated into R.C.X.[1]

The Weird Happenings Organization. This is an organization that spied on Excalibur.

W.H.O is a reference to U.N.I.T, a similar organisation in the television program Doctor Who.

Retrieved from "https://marvel.fandom.com/wiki/Weird_Happenings_Organization_(Earth-616)?oldid=5552304"
Community content is available under CC-BY-SA unless otherwise noted.