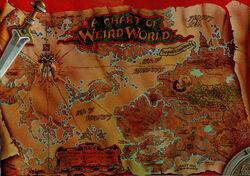 Weirdworld was a planet located within an unidentified dimension where the evenly-matched gods of light and darkness were embroiled in an everlasting game, which they played despite neither side having any hopes of actually winning, simply to avoid the boredom of immortality.

Weirdworld was forged eons ago from the cosmic debris created when the dark god, Darklens, rebelled against his own kind, but his uprising failed, and he was stripped of much of his power and exiled onto the planet as punishment for his insurrection.[1]

Much of the planet including Klarn later appeared as part of the floating island called Weirdworld.[2]

Like this? Let us know!
Retrieved from "https://marvel.fandom.com/wiki/Weirdworld_(Planet)?oldid=4408640"
Community content is available under CC-BY-SA unless otherwise noted.
FandomShop Newsletter Join Fan Lab