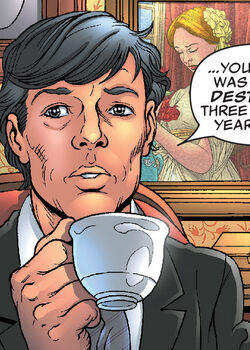 Wendell Volker is a Belgian grad student who is writing a paper on the family lineage of Baron Zemo. According to Wendell, after Helmut was believed dead after a battle with the Grandmaster various students in Germany began speculating Helmut was alive and began writing a formula to prove their theory. Wendell approached Mr. Fantastic with the theory and Reed concurred with the theory.[1]

Wendell had been researching the various branches of the Zemo family and was looking for a way to bring Helmut back to the present so he could kill him. Wendell sets about murdering several of his and Helmut's distant cousins working on the theory that killing them brings Helmut that much closer to the present. Wendell finally confronts Helmut when he brings him back to the present. Helmut reasons with Volker and explains that Wendell killing him will not prove that Wendell is better than him and that the only way for Wendell to prove his superiority to Helmut is to let Helmut continue with his own redemption. Helmut reasoned that if he failed in his quest to redeem himself Wendell would be proven the better man but if Wendell gave Helmut a chance to redeem himself and Helmut succeeded then Wendell would still be proven the better man for giving him the opportunity.[2]

Helmut and Wendell made peace supposedly with the intent to redeem the Zemo family name together. Helmut's later actions show his bid to redeem himself has apparently failed. It's unclear how that affected his relationship with Wendell.[3]

Like this? Let us know!
Retrieved from "https://marvel.fandom.com/wiki/Wendell_Volker_(Earth-616)?oldid=4425848"
Community content is available under CC-BY-SA unless otherwise noted.