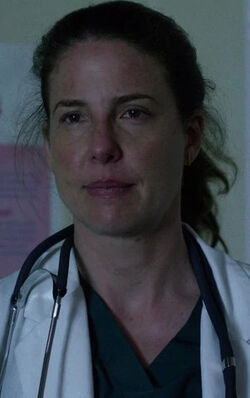 A medical doctor and the wife of lawyer Jeryn Hogarth. Their marriage fell apart, when Wendy discovered that Jeryn was having an affair with her secretary, Pam. Their divorce became increasingly hostile, as Wendy had evidence of Jeryn committing jury tampering which she used as leverage to take nearly all her wife's assets in the division of property.[citation needed]

Jeryn brought an injured Kilgrave to their house, hoping he would use his powers to make Wendy sign the divorce papers. Instead, Kilgrave ordered Wendy to cut Jeryn 1,000 times. Wendy was killed by Pam, when she tried to save Jeryn from her.[1]

Like this? Let us know!
Retrieved from "https://marvel.fandom.com/wiki/Wendy_Ross_(Earth-199999)?oldid=5825166"
Community content is available under CC-BY-SA unless otherwise noted.