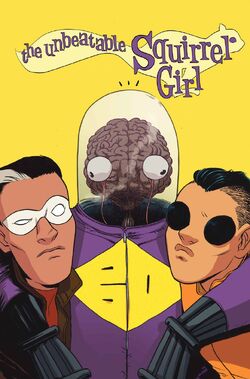 Brain Drain was a Nazi scientist during World War II who helped create Master Man.[4] He was injured during the crash of an alien vessel. Unable to repair his body, his brain was transplanted into a robotic body. Using the alien's technology, Schmidt was able to develop psionic abilities allowing him to control others. He used his newfound powers to send his alien saviors to battle the Invaders.[5]

He led an attack force, consisting of the villains U-Man, Master Man and Sky Shark, in battle against the Liberty Legion. With the intervention of a time-traveling Thing, Brain Drain and his group were defeated but managed to escape.[6][7]

After the fall of the Reich he escaped alongside Baron Blood (John Falsworth) on a ship. In the South China Sea, they were attacked by the Avengers, but before he was captured they were teleported away by Geoffrey Sydenham and offered positions in ICON.[8] Brain Drain was later shot in the head with an armor piercing bullet by Dominic Fortune, but was not arrested because ICON technically didn't exist.[9]

Shortly after, Brain Drain's head casing was trapped under a mountain of snow in Switzerland through unknown means. There he contemplated his past actions and renounced his Nazi ways. Eventually, he was able to take control of a nearby skier and freed himself.

He recovered and was able to engineer his arrival at the first Pan-European Conference on Super-Human Affairs (sponsored by Alpha Flight). There, he attempted to create chaos by implanting a psionic command in the minds of various superhuman delegates to kill the leaders of their country. He confronted Alpha Flight and ordered them to stand helplessly. Unfortunately for him he did not notice Aurora shift into her Jeanne-Marie personality who was free of his psionic hold. She grabbed his container and threw him far away, breaking his hold. Alpha Flight then embarked to stop the various delegates from killing their leaders.

Brain Drain considered himself a failure but the Master of the World saw great potential and recruited Brain Drain to be a member of his new Omega Flight, where his brain was contained in a robotic body.

Brain Drain tried to go to New York City to seek the assistance of Squirrel Girl, a super heroine that had helped some villains seeking a new path in life. However, his systems had failed and he was rendered in a safe mode that turned him into a killing machine.

When he arrived to New York City, Squirrel Girl was forced to confront him, and with the help of Tippy Toe, Brain Drain was shut down. After the threat had been neutralized, Squirrel Girl realized she had started that fight, and Brain Drain's erratic behavior could've been a consequence of malfunction. With the help of her friend Nancy Whitehead and their knowledge in computer science, Squirrel Girl repaired Brain Drain, removing the old processors that wouldn't let him change his ways. Now with control over his destiny, Brain Drain enrolled in the Empire State University with a disguise to his evident unusual features and appears to be a normal human.[3]

Mind Control: Schmidt has the psionic ability to control minds.

Brain Drain was once a brilliant scientist.

Like this? Let us know!
Retrieved from "https://marvel.fandom.com/wiki/Werner_Schmidt_(Brain_Drain)_(Earth-616)?oldid=6466364"
Community content is available under CC-BY-SA unless otherwise noted.