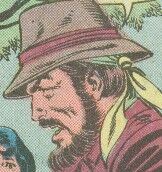 Werner von Doom was a folk doctor living with a group of Latverian Romani called the Zefiro, although he wasn't ethnically Romani himself. When he was unable to heal the Latverian Baron's wife, he took his son and fled. Almost frozen to death, the two were found by Werner's old friend Boris who brought them back to the Romani camp where Werner died[1].

Like this? Let us know!
Retrieved from "https://marvel.fandom.com/wiki/Werner_von_Doom_(Earth-616)?oldid=6416060"
Community content is available under CC-BY-SA unless otherwise noted.