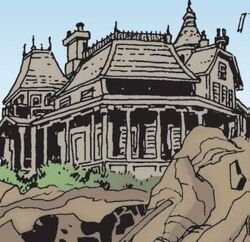 Agatha Harkness lives in a very rustic, somewhat un-nerving mansion, in Whisper Hill. For years, she served as Franklin Richards nanny. Franklin often stayed with Harkness at her home in Whisper Hill. At one point, the Fantastic Four also stayed at Harkness' home. During their stay, the team was attacked by the Frightful Four. Harkness used her supernatural powers to aid the Fantastic Four and defeat the villains.[1]

The Fantastic Four tried to call Agatha Harkness, but the telephone went unanswered.[2]

Like this? Let us know!
Retrieved from "https://marvel.fandom.com/wiki/Whisper_Hill?oldid=6100134"
Community content is available under CC-BY-SA unless otherwise noted.