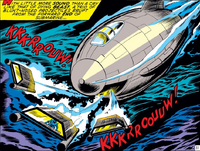 The White Dragon's Submarine was a massive vessel that served as White Dragon's base of operations. He had the Iron Man taken to the submarine, where he was put in the Transcriber and then released.

The submarine had five vertical launch tubes from which manned ballistic missiles were launched. Each of them carried a half dozen men in jet packs, who were released once they reached Iron Man. From the lower forward end of the submarine, it launched a trio of small manned submarines.

Each of the manned submarines launched an operative in an armored battlesuit towards Iron Man. The submarine was destroyed when the White Dragon pressed the self-destruct button, upon realizing that he had been a pawn.[1]

Retrieved from "https://marvel.fandom.com/wiki/White_Dragon%27s_Submarine?oldid=5533028"
Community content is available under CC-BY-SA unless otherwise noted.