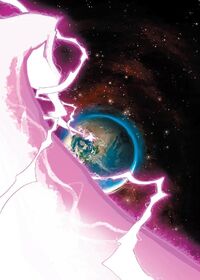 The White Event is a paradigm shift that acts as a cosmic trigger.

In the Superflow of each universe is a space station, built and maintained by the first race to become sentient. Each station maintains contact with the others, and scans their universes for a race that is about to become cosmically interesting. When it finds one that is doing so, it gives them a blessing - the White Event - and shepherds, in the shape of four glyphs that are gifted to beings who are compatible with them. With this, the species becomes aware of their power, and either expands responsibly, or devolves into anarchy. The system has stood for millions of years.

In this universe it happened at 06.48 UTC on March 2 2006 in the universe of Earth-555. The previous minute the Chinese, Russian & USA's early warning systems went offline. The event, in which "Everything went White", could be seen from everywhere in the world (including New York City, Optima Down, San Francisco, Latvia & Fort Meade).

Consequences of The White Event

Philip Voight mentions that there have been two similar events in the past, The Fireworks in the 1950s, after which he killed the last superhuman & another in 1988 caused by a volcanic eruption.

A White Event was also the origin of superheroes on Earth-148611.

The Incursions were a phenomenon where two universes would overlap at their respective Earths for eight hours, and then either one planet would be destroyed, or both universes. The trend of these Incursions was accelerating, and this caused a forward wave of destruction in the Superflows of the Multiverse. Across reality, the stations exploded. Realizing what they were losing, the stations were ordered to fire randomly, in the hopes that the worlds hit would be able to use their blessing wisely to stop the collapse.

At least one world was affected by this: Earth-616, where it was announced by Adam, a creature created by Ex Nihilo. He kept announcing it, as well as that "the universe was broken" in the language Builder Machine Code. It was Captain Universe who managed to decipher the code and the message Nightmask was giving, seconds before the White Event hit Earth.[2]

This White Event empowered Kevin Connor and turned him into Starbrand.

After awhile the new Kree homeworld of Kree-Pama was affected by a White Event. They received a:

Retrieved from "https://marvel.fandom.com/wiki/White_Event?oldid=6389162"
Community content is available under CC-BY-SA unless otherwise noted.