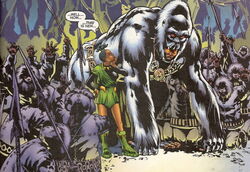 During World War II, the White Gorilla burned with an intense hatred towards the Black Panther and his people. Presumably gaining his powers from a similar magical ritual as the one that empowered M'Baku years later, the White Gorilla matched the Panther's physical prowess, but his village was no match for the advanced African country. The Gorilla held such a resentment towards Black Panther for not sharing their wealth and resources that he agreed to an alliance with the Nazis when the Red Skull and his forces planned to invade the country in order to take over its supply of Vibranium. He was part of a force of Nazi superhumans that invaded the Wakandan capital, attacking the Royal Palace of Wakanda before being defeated by Captain America.[3]

The cult's greatest warrior, M'Baku, set to claim the throne of Wakanda while T'Challa was away from Wakanda for several months. In disregard for the Wakandan decrees, the White Gorilla Cult was restored. M'Baku performed a ritual to gain enhanced strength by killing a rare white ape, bathing in its blood, and eating its meat.[2]

Retrieved from "https://marvel.fandom.com/wiki/White_Gorilla_Cult_(Earth-616)?oldid=5563622"
Community content is available under CC-BY-SA unless otherwise noted.