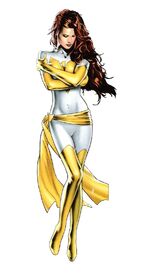 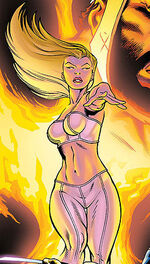 The White Phoenix first became created when Jean and the Phoenix Force later merged into one being. The Phoenix Force told Xavier, that "Jean is only the house where I live." Jean Grey was the closest thing the Phoenix Force had to a true earthly Avatar or physical embodiment and further that the Phoenix Force empowered Jean with life in a kind of mutualistic relationship or psychic bond. Tricked by a Magneto impostor, Phoenix and Wolverine ended up trapped on Asteroid M drifting closer to the Sun. Dying, Wolverine killed Jean and awoke the Phoenix Force within her. Using her incredible powers, Phoenix returned with Logan to New York City to face "Magneto". Defeated, his last act was to give Phoenix a stroke on the planetary level. Dying in Scott's arms, she urged him to live on.[1]

Then, 150 years in the future, a Phoenix egg hatched and Phoenix was reborn once more. It was revealed that instead of rejoining the X-Men after Phoenix's death, a mourning Cyclops quit the team leaving a desperate Beast to pick up the pieces. Using the drug Kick, actually an aerosol form of Sublime, Beast was corrupted and set a chain of events that left the world in ruin. Phoenix removed the Sublime entity from Beast and absorbed the future reality into the White Hot Room. In the White Hot Room, Jean appeared in her White and Gold Phoenix costume and was referred to by the Phoenix Consciousness as a White Phoenix of the Crown. Jean had felt like she was "supposed to fix something that was dying" but the Phoenix Consciousness said that she had "lost concentration in there". Met by other Phoenix avatars, Jean was urged to let her universe die but she decided to heal it. With some guidance from the Phoenix Consciousness, Jean took her universe in the palm of her hands and decided to create a new future by nudging Scott to continue Xavier's school and his relationship with Emma Frost.[2]

Nigh-Omnipotence (all powerful form of the Phoenix): No hosts can access the full powers of the Phoenix except Jean Grey. Only those who have a very strong connection can do so, with the strongest known level being the White Phoenix of the Crown, which thus far only Jean Grey have been shown to achieve, because she is completely compatible with the Phoenix Force.[3]