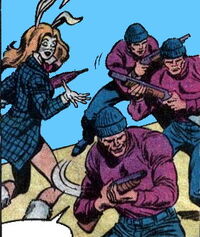 Lorina Dodson established herself as the eccentric criminal the White Rabbit, and assembled a small crew of thugs to begin a criminal career by robbing fast-food restaurants.

During one of the robberies, the gang crossed paths with Frog-Man, and nearly beat him to death, though he was saved by the timely intervention of Spider-Man. As Dodson escaped, the rest of the crew tried to subdue Spider-Man, to no avail.[1]

Retrieved from "https://marvel.fandom.com/wiki/White_Rabbit_Gang_(Earth-616)?oldid=5438648"
Community content is available under CC-BY-SA unless otherwise noted.