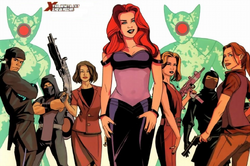 White Sky was a criminal organization that created made-to-order superhumans for their clients. They were contracted to create the Omega Clan to defeat X-Force. They were based out of a floating base disguised as a cloud.[1]

The White Sky Facility, the Cloud, was later used by the disbanding X-Force to revive Fantomex. E.V.A. hadn't finished to put in the settings when Deadpool activated the process, leading in the creation of two others Fantomexes, a lady one and an other dressed in black, because of the special brains-structure of Fantomex. In fact, the process generated one body for each brain.

A few of White Sky process' creations are known:

Retrieved from "https://marvel.fandom.com/wiki/White_Sky_(Earth-616)?oldid=5982824"
Community content is available under CC-BY-SA unless otherwise noted.