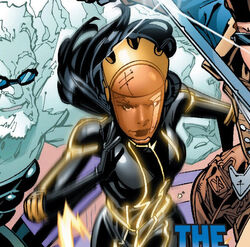 After gaining speed powers, Whiz Kid worked at a mail-room at the law firm of Goodman, Lieber, Kurtzberg & Holliway. This employment lasted until the firm's original offices were destroyed during a rampage by Titania. Afterwards, Whiz Kid apparently sought a transfer to a different firm.

Following the Superhuman Civil War and the formation of the 50-State Initiative, Whiz Kid registered with the government and was assigned to the Pennsylvania-based Liberteens. She was inspired by the Whizzer.

During the Skrull Invasion Whiz Kid used her super speed to suck the poison gas used by the Skrull Yellowjacket to save the other heroes. She succumbed to the gas and died.

Whiz Kid ran faster than 30,000 mph, sufficient to cross the US in minutes and run on water, with limited superhuman strength (lifting roughly 1000 lbs.). Her enhanced stamina allowed her to maintain speed for hours and she was adept at circling to create cyclones.

She was also a skilled union negotiator.

Like this? Let us know!
Retrieved from "https://marvel.fandom.com/wiki/Whiz_Kid_(Earth-616)?oldid=5483499"
Community content is available under CC-BY-SA unless otherwise noted.