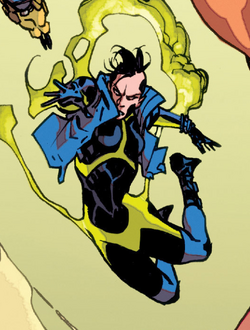 Wicked was a member of Genosha's Press Gang who under the order's of their leader Havok was called in to help quell a rebellion by the mutant residents of the island. She used her summoning abilities to bring forth ghosts of Genosha's past in hopes to scare the dissidents from rioting.

She succeeded as the apparitions belittled the living saying that what they were doing was a disgrace to all those who died. Wicked finished on her end, when Mystique was brought in to shapeshift into the form of Professor X to give a speech which put an end to the riot for good.

When Baron Grey refused to lift the quarantine on the island, Wicked went along with Havok's plan to travel to X-Topia so they could kidnap the healer Triage andRogue. But before they left, she told Havok that there was a spirit trying to contact him. It was his brother, Cyclops who told him not to go through with it. When they entered their airspace, Karma jumped out of the Quinjet with his team and ambushed the X-Men during a baseball game.[1]

During the battle and the loss of Magistrate Anderson, Wicked summoned many ghosts but many focused on ones from Phoenix's past which haunted her to the point of losing control. This allowed enough time for Wicked and the others to regroup and escape back to Genosha via Tempus's ability with their hostages in tow.[2]

The X-Men sent their own group led by Phoenix to Hammer Bay in retaliation for the ambush and kidnappings of their fellow members. Wicked and Bulletproof arrived in another Quinjet but this one was destroyed by the combined power of Storm and Phoenix but Wicked managed to shield herself from the blast along with Locke. She pummeled Rockslide with monstrous spirits so Bulletproof could take on Thunderbird.[3]

After finding out that the evil Cameron Hodge was brought back to life, Wicked was put on the team in charge of evacuating the Hammer Bay while the others went to handle Hodge in the sub-levels of the city. Wicked soon met up the main team and helped in the fight. In the end Wolfsbane took the Blackbird so she could fly it straight into Hodge as Bombshell and Havok used their abilities to create a huge explosion killing Hodge once more. Wicked was with everyone as they mourned the loss of their friends.[4]

Seemingly those of the Wicked of Earth-616.

Seemingly those of the Wicked of Earth-616.

Like this? Let us know!
Retrieved from "https://marvel.fandom.com/wiki/Wicked_(Earth-24201)?oldid=5681224"
Community content is available under CC-BY-SA unless otherwise noted.