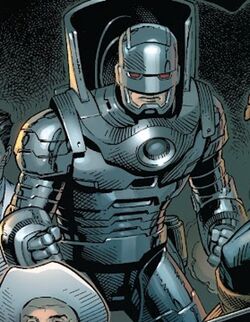 So long as I am master of my stilts, I'm unbeatable! I'm completely invincible!

Wilbur Day was a scientist who was employed by Carl Kaxton, who invented a hydraulic ram device. Wilbur stole Kaxton's designs and used them to engineered a pair of extremely long, telescopic metal legs, which allowed him to tower high over the ground.[2]

Matt Murdock was hired by Wilbur, who contacted Kaxton to tell him that his former employee intended to sue him, a threat which Kaxton encourages them to follow through on. Later in his Daredevil guise, Murdock unsuccessfully battled Stilt Man, who manages to get away once again. Later, when meeting with Wilbur again, Kaxton arrives at the office to contest the law suit. While the two argue over who owns the rights to the hydraulic device, Matt notices that one of them is lying due to an irregular heart beat, but can't figure out which one is the liar because they are too close together. Following Kaxton as Daredevil, he's quickly shaken off by Kaxton who realizes he's being followed. Daredevil cannot resume his tailing because of reports that Stilt Man is causing havoc again. He again fails to stop Stilt Man. Returning to Day, the two go to confront Kaxton directly. There they find the hydrolic lifts, which turn out to be Stilt Man's stilts.Attacked by Kaxton with a gun, Day manages to knock Kaxton out, and then reveals to Murdock that he's really Stilt Man, and that he came to steal a shrinking device from Kaxton before knocking Murdock out. Taking the device and making a run for it in his stilts, Day is followed by Daredevil and in the battle, the shrinking ray is turned on Day who shrinks so small that he disappears from sight.Returning to the Nelson and Murdock law office, Matt is confronted by Kaxton, but Murdock tells him that Day has dropped the law suit and they decide to let the whole thing go.[2]

He was once saved by the Masked Marauder and teamed up with him to kidnap the Nelson and Murdock law firm employees.[1] After fighting Spider-Man he went to fire a ray gun as he was standing in water and shorted out his electrical systems leaving him unconscious and ready to be picked up by the police.[3]

However, he was rescued by the super-villain Electro and joined his Emissaries of Evil. Their plan was to defeat Daredevil as a team, but they were in turn defeated themselves.[4][5]

Wilbur was later hired to kill district attorney candidate Foggy, but was stopped by Daredevil.[6]

Wilbur then disguised as Stunt-Master, and attacked Daredevil on a Hollywood movie set.[7]

In San Francisco, he kidnapped Carl Kaxton and his daughter, to force him to recreate his molecular condenser. Kaxton kept working, but ran out of parts, so Stilt-Man had to arrange for others to be brought in. Stilt-Man brought back the new parts and forced Kaxton to get back to work. When Kaxton briefly refused, Stilt-Man struck him and reminded him that Barbara could be turned over to Endros. Stilt-Man soon took the finished condenser, with which he planned to shrink the Golden Gate Bridge, taking Barbara with him. Daredevil soon arrived and defeated Endros. The hero had to strike Kaxton to get useful information from him about Barbara, then he rescued her with Black Widow. They picked Kaxton up and took him to breakfast with Barbara after Stilt-Man was defeated. Later, a homeless man, Eddie, found the condenser and planned to sell it to Jonny the Rake, but chose to throw it away instead.[8]

Stilt-Man came across the still hovering Trapster and took his weaponry. As Falcon is about to testify against his former associates, Stilt-Man attacked. The heroes eventually manage to topple Stilt-Man and defeat him, despite his advantage of Trapster's weapons.[9]

Stilt-Man continued his criminal career and fought several superheroes such as Black Goliath[10], but without much success.[11]

Wilbur freed Blastaar and F.A.U.S.T., and was given a special new battlesuit constructed of secondary Adamantium.[14][15] He stole some radioactive isotopes, and battled Thor, but lost the fight and was stripped of his suit.[16][17]

When his armor was stolen by a small-time crook named Turk Barrett, Day contacted Daredevil and informed him of a weakness in the armor. Thanks to Day's information, Daredevil easily disabled the auto-gyroscopes necessary for the armor to keep its balance and brought Turk down. Day later modified the armor to prevent Daredevil from using this newfound knowledge against him.[18]

Wilbur wanted to regain his reputation by defeating Spider-Man. He turned an automated Cordco factory against the wall-crawler. When Spidey saved his life from an automatic sonic disruptor, Wilbur decided not to kill him. He delivered Spidey's unconscious body to Vincent Martinelli's security detail and left the premises.[19]

Wilbur was one of the many armored villains whose technology had been upgraded from stolen plans from Stark Industries. He was defeated by Iron Man when he threw one of his own hydraulic legs at him to knock him out.[20]

He later attempted to kill D.A. Blake Tower for sending him to prison, but was captured by She-Hulk.[21]

During the Acts of Vengeance, Stilt-Man fell under the mind control of Doctor Doom and was ordered, alongside many other villains, to attack the Fantastic Four in Washington, D.C. while they were giving a speech to the congress. He and his pals were defeated by The Thing, Human Torch and the She-Thing.[22]

Wilbur was one of the villains who attempted to attack the Avengers at the site of their reconstructed mansion, but was foiled by the construction workers.[23] Wilbur was a regular visitor to the Bar With No Name.[24] Stilt-Man is listed in one of Spider-Man's most embarrassing moments.[25] Wilbur and various other criminals witnessed Captain America disguised as Crossbones battle Batroc the Leaper.[26][27][28]

He joined Hobgoblin's team when they battled Alpha Flight.[31] He then appeared in the gallery during the Tinkerer's court case.[32]Phil Sheldon captured an image of Stilt-Man during a crime at some point.[33] Stilt-Man later attended the wedding of Absorbing Man and Titania.[34] While the heroes were away fighting the Secret Wars, New York Police Department faced many supervillains such as Stilt-Man.[35][36]

He battled Spider-Man again.[45] and was with a group of villains when Spidey visited the Bar with No Name.[46]

When Daredevil's secret identity of Matt Murdock was exposed by a local newspaper, Wilbur visited the law offices of Nelson and Murdock, announcing he was sick of the whole ordeal and that he was retiring as Stilt-Man. He left his armor in a suitcase on Murdock's desk, and was forcibly removed when he began yelling his paranoid conclusion that Murdock was the real Kingpin. Murdock then jokingly asked his law partner, Foggy Nelson, if he'd like to be the next Stilt-Man, an offer he quickly declined.[47]

He returned to his old ways, however.[48][49] He was eventually arrested again and locked up in the Raft.[50]

The Superhuman Registration Act offered Wilbur a chance at redemption. He signed up with the government and was outfitted with a new suit to serve as a law enforcer during the Civil War.[51]

He was killed by the Punisher while pursuing a crook [52]. After his death, many super-villains held a wake for him at a Bar with No Name where it was revealed he had married Princess Python.[53]

Day's death became a cause célèbre for an anti-technology anarchist terrorist cell who called themselves the Bastard Sons of Wilbur Day, despite Spider-Man pointing out that their beliefs and goals had very little to do with anything Day had believed.[54] Another criminal, Lady Stilt-Man, paid homage to him posthumously.[55]

A couple of years later, the Jackal brought him and numerous other Spider-Man villains back to life. Spider-Man, upon discovering this, fled the Jackal's base in San Francisco with the Spider-Woman of another reality.[56] Stilt-Man and the other revived villains were sent out to look for them.[57]

Strength level unknown, although the impact of both legs drove She-Hulk deep enough into the ground that she ended up in the roof of a subway.[citation needed]

Stilt-Man's Suit: If the lower portion of the legs were damaged, they could be detached. However, doing so decreased the height they could reach, due to the loss of the telescopic segments in that section.His armored suit's telescoping legs could extend up to 290 feet; silicon coating resisted adhesives such as Spider-Man's webbing; Augmented strength.[citation needed]

Like this? Let us know!
Retrieved from "https://marvel.fandom.com/wiki/Wilbur_Day_(Earth-616)?oldid=6469600"
Community content is available under CC-BY-SA unless otherwise noted.