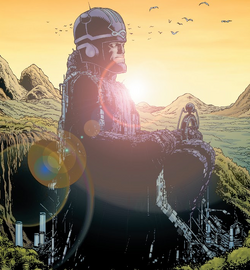 The Wild Sentinels Factory was one of many created by the U.S. Government in case of Genetic War. The factory was abandoned years later and set on command for a Trask. Cassandra Nova brought Donald Trask III there, the Sentinels escorted the two, to the factory. Soon a fight started between Cyclops, Wolverine and Ugly John, and the Wild Sentinels. The fight ended when the mutants were captured and imprisoned. Wolverine escaped right after Ugly John was being tortured. Cyclops soon escaped also. The battle finally ended when Cyclops killed Ugly John to take his agony away.[1]

A year later, the factory was taken over by the Children of the Vault, as a defensible stronghold from which nobody would anticipate an attack.[2]

The trio of mutants survived the attack and spent the next 100 years gathering intelligence on the Vault. They discovered that any Children that had died were reborn in a place called the Crèche and that City, the artificial intelligence that managed the Vault, was evolving the Children so they would eventually take over Earth. After Wolverine and Darwin were captured, Synch fled the Vault and waited outside for a week before reentering, resulting in 100 years going by. Synch freed Wolverine but couldn't save Darwin who was sacrificed by City so it could learn to create a new generation of Children. Synch and Wolverine were killed by the Children while fleeing the Vault, but Synch managed to make telepathic contact with X, which ensured everything he had learned about the Vault was passed onto his resurrected form.[5]

Housing the Children of the Vault; formerly Creating Wild Sentinels.

Like this? Let us know!
Retrieved from "https://marvel.fandom.com/wiki/Wild_Sentinel_Factory?oldid=6435724"
Community content is available under CC-BY-SA unless otherwise noted.