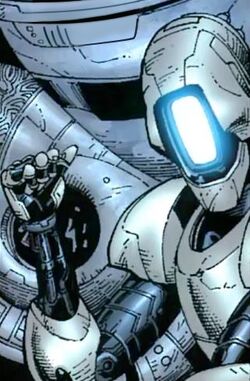 The Wildebots are a race of robotic lifeforms that hail from the planet Cron. They were brought to Sakaar by the Autocrons when they were shipped went through the Great Portal and crashed. The pilots died on impact, but the mechanical creatures escaped and actually thrived on the planet Sakaar. The type of creatures range from humanoid-like robots to giant robotic monsters such as the Eggbreaker.[citation needed]

They made their home on the Chaleen Plains and hunted the natives of Sakaar. Some of the Wildebots and the Eggbreaker were captured and taken prisoner by the Red King. They were forced to fight his imprisoned gladiators in the city's coliseum. These creatures faced the Warbound and during the battle ate the Incredible Hulk, but was killed by when he broke out its stomach. The other creatures were then ripped apart by the Hulk.[1]

Wildebots are technologically-advanced Autocrons, a race of iron-based, non-organic life forms originating from planet Cron in the Betelgeuse Star system. They have mastered space travel and have the ability to repopulate planets to their liking.

Like this? Let us know!
Retrieved from "https://marvel.fandom.com/wiki/Wildebots?oldid=6379340"
Community content is available under CC-BY-SA unless otherwise noted.