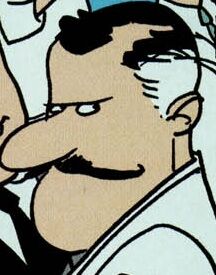 Dr. Wilfred Nagel codenamed Dr. Josef Reinstein was a scientist working for Project Rebirth, the experiment that created Captain America during World War II. Following the death of Dr. Abraham Erskine, he was tasked with recreating the Super Soldier Serum by the US Army. He recruited 300 African-American soldiers who were used as test subjects at Camp Cathcart. Isaiah Bradley was the only survivor and took on the mantle of Captain America.[1]

Knowledgeable in chemistry and genetics

Like this? Let us know!
Retrieved from "https://marvel.fandom.com/wiki/Wilfred_Nagel_(Earth-616)?oldid=6437836"
Community content is available under CC-BY-SA unless otherwise noted.