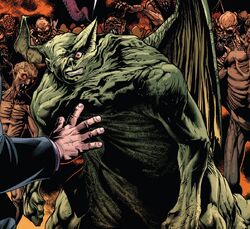 A childhood friend of Steve Rogers, William "Bud" Adams joined the US Army during World War II and attained the rank of lieutenant. By 1945, however, Bud had developed shell shock and returned stateside, being admitted to the Ravencroft Institute.

However, Ravencroft Institute had been taken over by Weapon Plus, which had partnered with Count Dracula and Blood Baron and was performing experiments on the inmates in order to find a way to rid vampires of their weaknesses.[1] The failures, transformed into grotesquely deformed vampires, were dubbed the "Unwanted" and shunted into a vault in the Ravencroft Institute's basement.[2]

Bud was among those experimented on by Weapon Plus, turning him into a deformed one-eyed vampire with a tumorous mass of bat-like body parts engulfing the entire left side of his body. After getting a call from Bud's wife who was concerned when she couldn't get in touch with him, Rogers - now the superhero Captain America - and his sidekick Bucky Barnes attacked Ravencroft Institute looking for him. Bud was found in his cell by Bucky and begged to be put out of his misery.[1]

While Bucky later told Steve that Bud was dead, he was released alongside the other Unwanted by Doctor Jonas Ravencroft - the founder of the institute - to take revenge on the Weapon Plus members.[1] Through unknown means, the Unwanted were rounded up and locked in the vault in Ravencroft's basement. Coming under Bud's leadership, the Unwanted established a lair in a cavern under the institute and bided their time.[3]

When Wilson Fisk - who as the Kingpin of Crime had used the Unwanted to dispose of bodies - ventured into the vampires' vault,[2] Adams implanted a hypnotic suggestion that later compelled him to return to the vault by himself. Confronting Fisk personally, Adams demanded that he run the rebuilt Ravencroft Institute as a proper mental hospital, threatening to expose the full extent of Fisk's crimes and ruin his tenure as mayor if he declined to do so. Fisk smugly refused, gloating that the Unwanted were trapped in their vault, but Adams forced him to open the door and had him brutally beaten, sending the Unwanted to spy on the staff and guards.[4]

When Fisk sent a strike force consisting of villains and armed men to fight the Unwanted, Adams tricked them using an Unwanted telepath to make them fight illusions while he and the Unwanted launched an invasion of Ravencroft from the institute's hidden basement.[5]

After taking over Ravencroft, Bug tried to force prison staff member John Jameson to tell him where he hid the journal of Jonas Ravencroft so he could use its contents to close down the institute for good so no one else would be harmed by it. When John refused, Bud revealed that Fisk had built a self-destruct program into Ravencroft in case of it was taken over and threatened to blow the institute up along with the staff if Jameson didn't cooperate.[6]

Bud later brought out a badly injured Dennis Dunphy and Ashley Kafka to motivate Jameson, who revealed that the journal had gone missing and that he didn't know where it went. However, Bud didn't believe him and was about to interrogate Norman Osborn when he was informed that Fisk and his strike force were on the attack, aided by Misty Knight and Frank Castle. Bud commanded the Unwanted to hold off Fisk and his men long enough for the self-destruct program to go off, but he was attacked and severely injured by Jameson in his Man-Wolf form. Following his defeat Bud saved Dunphy's life and cooperated, but was taken alongside the surviving Unwanted by the mysterious J.A.N.U.S. organization to be experimented on by Dr. Karl Malus and Dr. Kafka, much to Bud's horror.[7]

Seemingly those of a typical vampire

Seemingly those of a typical vampire

As a vampire, Bud has fangs and claws.

Like this? Let us know!
Retrieved from "https://marvel.fandom.com/wiki/William_Adams_(Earth-616)?oldid=5590681"
Community content is available under CC-BY-SA unless otherwise noted.