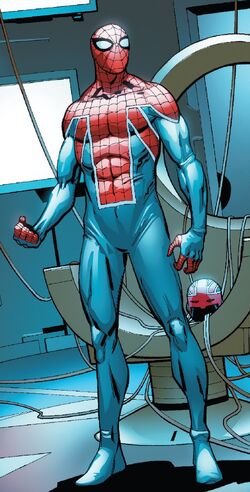 How many worlds have you been to? I've seen multitudes. They're all beautiful... and different.

A rookie Captain Britain, Spider-UK came to learn of the Great Hunt when Morlun was detected on Earth-1983. Killing the Spider-Man of that world, and after watching two other Spider-Totem-connected people getting manslaughtered, he runs away to warn Saturnyne and Roma of the murders.

However, Saturnyne, more distraught over the Incursions, grew angry at what she felt was something insignificant and ordered Roma to throw him out. However, Roma was much more sympathetic and charged Billy with protecting the other Spiders, considering that their murder must have been for a truly sinister purpose, for which she gave him a Dimensional Travel Talisman to enable him travel through the Multiverse.[3]

During his mission, he came across a certain Spider-Woman.[4] He would later travel to Earth-982 with Old Man Spider-Man to recruit Spider-Girl and her brother, although they arrived too late to save her father.[5]

After different complications, the Spider-Army managed to defeat and exile the Inheritors to Earth-3145.[6] When the different Spider-Men that formed the Spider-Army started returning to their respective realities, Spider-UK couldn't do so, as his universe had been destroyed as a result of the Incursions. He decided to stay in Loomworld, the Inheritors' former base, and form the Web-Warriors, in order use the Web of Life and Destiny to reach out any universe in need of a Spider-Man.[7]

Spider-U.K later ran a training exercise regimen with the other Web-Warriors on Earth-3015 to sharpen their skills.[8]

When it was determined that someone on Earth-616 was using the Inheritors' cloning technology, Spider-UK and the other Web-Warriors travelled there to recruit Miles Morales and investigate. Discovering the Superior Octopus was responsible, Spider-UK and the other Spider-Totems invaded his lab and attempted to destroy his replacement clone bodies. Otto intervened until he discovered that Jennix had hacked into his technology from Earth-3145 and engineered bodies for himself, Morlun, and Verna. When Morlun consumed The Spider-Man, Spider-UK attempted to kill him in retaliation, but had his neck snapped from behind by Verna.[9] When Superior Octopus told Doctor Octopus to active the self-destruct sequence in his laboratory to flee the revived Inheritors, the Web-Warriors escaped the laboratory, and Spider-UK's body was presumably consumed by the explosion.[10] He was given a burial in the England of Earth-803, the home of Lady Spider. She found it fitting that he be buried in the same cemetery as her parents, as she loved him like a brother.[11]

Seemingly those of the Peter Parker of Earth-616, and a member of the Captain Britain Corps.

Like this? Let us know!
Retrieved from "https://marvel.fandom.com/wiki/William_Braddock_(Earth-833)?oldid=6121397"
Community content is available under CC-BY-SA unless otherwise noted.